Betfair versus the Bookies - The Virtues of Value

The blog below is also available on www.golf-monthly.co.uk as an edited article.  I have been blogging for GM over the past few months now and am thoroughly enjoying the opportunity given to me by the country's best golf mag.  Thanks TC ; )

Stenson won!  StensWon, as he shall be known forthwith, rewarded loyal backers with a 35/1 Betfair booty bonus and delightfully demonstrated two things.  Firstly, that it’s prudent to peruse the punting purveyors for prices, and secondly that persistence and consistency lead to confidence and prosperity.


Heroic Henrik was 28/1 with BetVictor before the off last week, 25/1 with all other bookmakers, but was being readily layed (or laid, if you’re that way inclined) at 36 on the exchange. 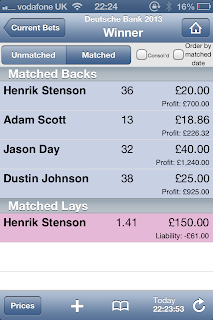 Minus Betfair’s commission (usually around 4-5% unless you roll high on a regular basis – mine is currently 4.8%), profit on the £20 win-only stake (before being offset against losses) was a devilish 666 pounds and forty pence.  The same money with Mr Chandler would have returned you £560, a shortfall of £106.40.  So don’t get sucked in by those ridiculous Dennis Pennis adverts. 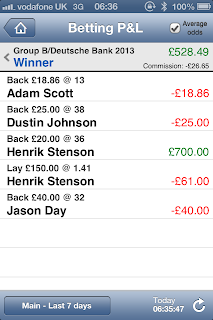 Email ThisBlogThis!Share to TwitterShare to FacebookShare to Pinterest
Labels: Backing, Betfair, Betfair or Bookies, Bookies, Gambling, Laying, Trading, Value, What is Value?, Where to Gamble