A Lack of Written Attention, not of Genuine Affection...

You may very well be forgiven for thinking that the notable absence on these pages of a meaningful foray into the feast of flat racing, somehow indicates a loss of appetite for the sport over the summer months.

A friend of mine, who has been mentioned on these pages before, even went so far as to say he was insulted by my perceived lack of attention and interest in the code of horse racing that is contested over distances of five furlongs up to around two miles and during which the animals are not encouraged to leap gallantly over bristly obstacles.

Well, while I am always keen to take on board constructive criticism, the insinuation that a withdrawal of words and writings on this website equates to an absence of interest or excitement is wholly inaccurate.

I will acquiesce that this weekend, with the Cheltenham Open Meeting in full flow and with Punchestown delivering knockout blows in the shape of Mullins one-two Champagne Fever and Hurricane Fly, I certainly return to these pages with more vigour.  But I have taken huge pleasure and eked the occasional pot of profit over the period during which my Raymond Weil has been set to British Summer Time.  If anything, I've been enjoying it too much to have found time to write about it!

A few Palphabet highlights of the 2013 flat season:

- JP Murtagh - what a man - although not backing Royal Diamond on British Champions Day after having circled him in the morning's newspaper was a real error.

- Getting on a Producer / Lost in the Moment 4/1 double with a £100 stake the weekend after a visit to the Hannon yard.  Made all the more special by the fact that the double in question took place in Istanbul, was brought to my attention by Richard Snr in a "conversation" I was fortunate enough to share with him (I basically overheard him mentioning it), and required real endeavour to get on - I really savoured the rewards on this one.  Balthazar King's raid on a French cross country course at something ridiculous like 22/1 also provided under-the-radar European entertainment.

- BCD3 - I've not missed one yet! Breton Rock, Olympic Glory and Farhh ensured that although it wasn't a case of "Frankel who?!" on the richest day in British racing, there is life after the Sir Henry Cecil wonder-colt.  Meeting Paul Bittar; James Knight, Simon Clare and the Coral crew; merely seeing Julian Muscat from afar - all these characters ensured a fantastic day out.  Getting so obliterated on red wine that I knocked a table of drinks over some well-dressed ladies was only a small low point of an otherwise perfect day. 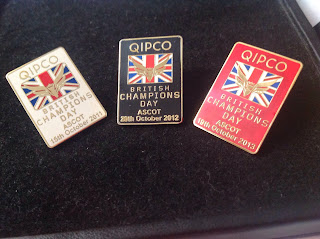 - The young Irish apprentice champion - Conor King - caught the eye many times, and none more so than when completing a 14,725/1 quadruple over at Cork.  Spoke very well when interviewed on the telly during some of the more high-profile meetings, he's definitely one to watch.

- Ryan Moore vs Graham Cunningham - this was an enjoyable exchange, with Ryan taking to his Betfair column to very eloquently put the outspoken TV pundit back in his box for a while.  Cunningham was not quite so scathing in his analysis of Moore's Melbourne Cup ride on Dandino, although somewhat ironically the horse's owners decided to boot him off for next month's Hong Kong vase.

So, yes, I have thoroughly enjoyed the thoroughbreds throughout the warm months, and now I've worn myself out with memories I actually can't think straight about today's National Hunt contests, so I'll just leave you with my selections:

3.00 Cheltenham - I think his horses could be undervalued at the moment, and with Harry Derham taking five pounds off Salubrious I just wonder if he's worth an each way bet..

1.00 Punchestown - Champagne Fever - NAP (also pairing him up with the Fly for a Mullins - Ruby Walsh double.. was great to see Ruby back at Cheltenham yesterday giving a great ride to win the last on board Quick Jack)