The blog below is available on www.golf-monthly.co.uk as an edited article.  I have been blogging for GM over the past 10 weeks now and am thoroughly enjoying the opportunity given to me by the country's best golf mag.  Thanks TC ; )

You’re welcome.  That’s what Bubba Watson says on many a YouTube video like that one, joshing around and playing the fool like someone who doesn’t take life too seriously, albeit while hitting some pretty impressive and entertaining shots, occasionally of blancmange rather than a little white ball.


Bubba actually wrongly displays the text “your welcome”, after the above clip, his incorrect grammar and complete disrespect for apostrophes perhaps betraying his lack of education through total dedication to his sport.  Or maybe he’s just thick.  Or “dumb”, as he admits in this PGA interview.
The phrase ‘you’re welcome’ is usually preceded by someone thanking you for a kind gesture.  Well, this past week I have certainly not been offering any gratitude in the direction of Mr Watson.


His caddy probably wasn’t too impressed either, after Bubba’s collapse on the par-three 16th saw him turn a two-shot lead at the head of the scoreboard into a one-shot deficit, ultimately relinquishing the title, he took his dissatisfaction out on his assistant.


This blog http://ftw.usatoday.com/2013/06/bubba-watson-blew-up-on-his-caddie-in-the-nicest-way-possible/ makes the salient point that Bubba was just doing at the Travelers Championship (one L, no apostrophes? Weird...) what most amateurs do on courses around the world every day – blame someone else for their mistakes – well, in that case, I am blaming the 2012 Masters Champion for my losses last weekend. Me and Bubba (or rather, Bubba and I) have previous, as his playoff win against Louis Oosthuizen cost me Augusta profit last year.  Having sided with the South African for the coveted Green Jacket, it was agonising to see that big hook land where it did, denying me a four-figure payout.   Last weekend brought all those miserable memories flooding forlornly back into my bitter, sorrowful soul.

To compound the discontent, I layed my entire book against Ken Duke winning, meaning that any of Chris Stroud, Graham DeLaet, heck – even Bubba Watson himself, emerged victorious, I wouldn’t lose anything.  Duke had never been crowned victorious in his journeyman career, hit 999/1 on Betfair at one point as the chart below painfully portrays, and so I thought the £215 lay at 1.41 was a reasonable course of action.  He went on to win, I went to bed a loser for the second week running.
﻿ 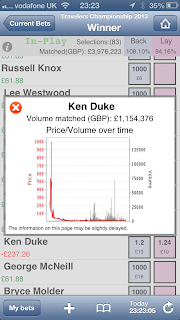 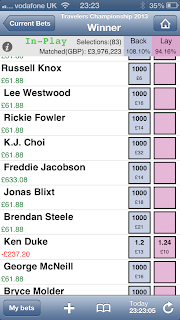 For this week’s AT&T National and Irish Open I went hard (well, £15.12 each way) on a Seung-Yul Noh/Graeme McDowell double.  Noh was fourth in the US event last year and was priced up a 150/1 outsider, while G Mac, despite missing the cut at the US Open and at this course twice, where he has also never managed to record a score under-par, appealed at 18/1 (for some reason) with SportingBet offering six place each way terms.
That would have given you a 46.5 bag return, had McDowell not missed the cut and Noh not been +5 when I last looked:  You’re welcome! 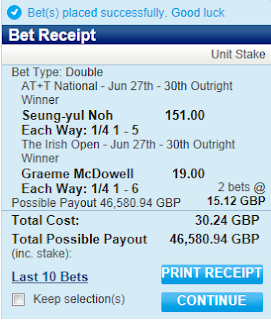 ﻿
***
Feedback from your friends can come in many guises: "your hair looks shit", "you were an absolute liability last week", "your missus is gonna leave you when she makes her first million in business" are just a few examples of the more publishable words of wisdom given to me by my mates over the years.
This week, I was informed that Palphabet was becoming little more than a copy & paste exercise for Golf Monthly, that I hadn't written anything about racing for two months (that's a lie, by the way), and that therefore, no one would bother reading it.
Well, if you've got this far, I thought I'd reluctantly listen to the lads and go back to my roots.
Various expired bank cards have meant that my multitude of accounts with online bookmakers required some spring-cleaning.  Since Bet365, a favourite of mine throughout late 2012 and into early 2013, have decided to severely restrict (/ban) me from trading with them, I've had some decisions to make.
The P&L for May, across all of my accounts looked like this: 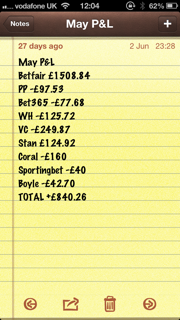 Since then, due mostly to debit card admin rather than any particular problems with online betting shops,  I've only been playing around with Betfair (and their new Sportsbook), SportingBet, Coral and my new favourite, Stan James.  Stan's golf prices are often the best around, even better than the Betfair exchange prices available (with no commission taken on winners), and I like the fact that their spokesman @roryjiwani regularly retweets links to my blogs!
One of the most satisfying events of recent weeks has been renewing my piece of Barclays plastic and having it emblazoned with the two greatest steeplechasers of my short love affair with horseracing. 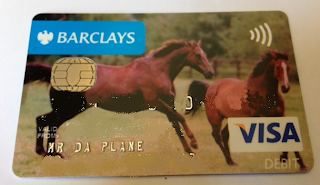 The fact that I have chosen those two equine characters, rather than Frankel and Sea the Stars perhaps explains why my writing on the sport has been fairly limited since the Aintree Festival.  No matter how hard I try, and I do enjoy it, I just can't find enough inspiration in flat racing to put pen to paper with the same passion as I do over the colder and darker months of the year.
Seeing champion of jumps Nicky Henderson get a 12/1 winner at Royal Ascot gave me more pleasure this "summer" than any winner I've had over a seven furlongs, and it speaks volumes that the main mention on these pages with regards to The Sport of Kings has been a genuine and heartfelt tribute to Sir Henry Cecil.
So, with only a passing interest in the Confederations Cup, a mild understanding of the betting markets surrounding Rugby Union and my small but long standing bets on the next Manchester United manager to follow SAF successfully settled, my current bets and conversational focus has been limited thus: 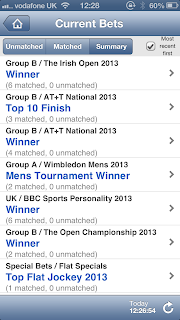 Sports Personality of the Year 2013 (for which I assume the Racing Post is still suffering a gagging order), antepost golf betting and the winner of Wimbledon Men's tournament dominates the screen above and are likely only to be given company by a few stabs on Le Tour, as I attempt to improve my knowledge of a sport that appears to offer entertainment and value in abundance, but about which I have very little knowledge, and of course, The Ashes.
So there we are - Palphabet has become rather more focused on golf, granted, but there's still plenty to discuss away from the fairways and greens.... that is until the proper beasts start galloping their way towards fences at least four feet and six inches tall and I can get stuck in with pen and pound once again.
﻿
***
UPDATE: Sunday Morning, 10am.....
These were the results of yesterday's picks at Newcastle, Newmarket and Curragh.  It's almost as though the lords of the flat were listening to me slagging off their noble sport, and decided to woo me with a fine fillip: 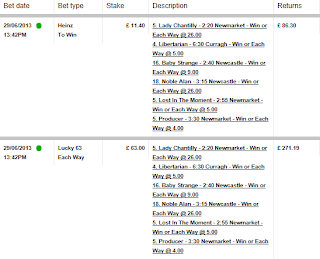