I'm not one to use the term "literally" lightly.  But I can honestly say this: never before have I metaphorically embarked upon a voyage across the symbolically stormy seas towards Cheltenham with such wind in my make-believe sails, figuratively speaking.

I have, you see, had a weekend of punting successes, beginning with the Premier League of Darts on Thursday night, and concluding with the WGC Cadillac Championship at Doral yesterday that has seriously, literally given me the confidence to walk on water with this week's wagers.

Here's the summary of profit, although please deduct about £150 from this due to laying a bit of Tiger off on Betfair, and losing on a few top 10 golf bets: 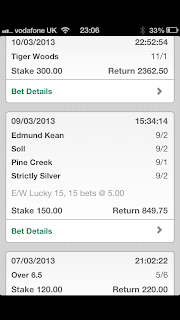 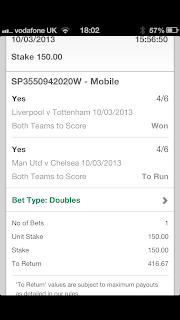 My fondness for bet365's customer services has increased in harmony with my account balance over the past few days too.  Their telephonists and online-chat agents have provided me with answers to my questions regarding payouts and bonuses, leaving me feeling warmth towards them.  So it is with a small hint of guilt that I placed a fivefold for the week today that will undoubtedly make them regret the day they let me open an account with them (that was in December when their attractive odds about Sergio Garcia and Thongchai Jaidee in the Iskandar Johor Open led to my £200 deposit being matched by the firm, who then had to pay me out on both of those golfers at 4/1 and 16/1 respectively).  Forgive me for sounding smug, but can you pick many holes in this bet?

But bet365 aren't the only bookmaker to feel sorry for this week, although they also have their Channel 4+1 offer, which rewards punters holding winning bets of 4/1 or higher on televised festival races with a free bet in the next televised race - an offer which gives plenty of value for siding with non-favourites in most races.  Paddy Power are leaving themselves extremely exposed by returning losing bets in tomorrow's Stan James Champion Hurdle if Hurricane Fly wins, and he is favourite to do so.

William Hill are paying 5 places for your each way stabs in the Supreme Novices, a race in which there are some mammoth prices of 500/1 being quoted about a couple of the "rags" and meaning your horse only has to finish about half way up the field to ensure you get some kind of return.  With attractive options in the shape of Dodging Bullets, Champagne Fever and Puffin Billy threatening the supposed procession of My Tent or Yours and Jezki, and with the infamous regularity of short priced favourites getting turned over in the festival's curtain raiser, it's got to be worth taking on the JP McManus duo at the head of the market with one of the traditional firms, or by laying them on Betfair, who are waiving commission fees for tomorrow.

Victor Chandler will refund losing bets on the same race up to £50 by crediting your account with a free bet you must stake before the end of the week.   If you win, you win... if you lose, you get the chance to win again - the poor bookies / exchanges are going to go broke in their quest for your betting business aren't they?

Maybe! With bankers like Quevega, Sprinter Sacre and potentially Simonsig and Bobs Worth (I'm not so sure about the latter two), there's every chance that the bookies' generosity in refunding monies and paying out half way down the field will be compounded by good old-fashioned high-rollers trying to win two-and-a-half-grand off a 10-grand stake (in the case of the Champion Chaser elect anyway).  Upon watching last year's Arkle, and forwarding to the leap about 2 minutes 10 seconds into this clip, I added Sprinter Sacre to my fivefold for the week without hesitation.
I had a great first day at Cheltenham in 2012, but a torrid Wednesday.  I am hoping for a less bumpy ride this year, and so I'm quite happy going with four or fivefold bets, using Lucky 15s and Super Yankees to spread the risk and prolong the fun, staking relatively confidently due to a fortunate finding of form but not getting too carried away where I'm not too sure, most notably in tomorrow's Arkle duel of Simonsig vs Overturn and the extremely competitive Champion Hurdle, although the various offers listed above mean I will have a bet of some kind!
Day 1 advice therefore is:
Supreme Novices
Lay: My Tent or Yours on Betfair
Back: Champagne Fever (either e/w with William Hill for 5 places, or with Victor Chandler, to get your money back if you lose)
Arkle
Watch Simonsig vs Overturn and enjoy it!  I was a fan of Overturn but the ground has me worried.  If I had  to bet, I would favour Overturn still at the prices - I think PP are going 4/1 in the morning
JLT
First big handicap of the meeting - a juicy one and I've just noticed Quantitativeeasing appear in my inbox thanks to my AtTheRaces.com tracker.  I've made a note asking "AP on board?" and yet I see that Barry Geraghty has the ride, with Champ taking Nadiya de la Vega as his preferred pick.  Bazza G says the following about JP McManus's "secong string" horse on his ATR blog: "I’d have been happier if the ground had been better because those conditions suit him. But he does seem to be coming to himself and he has now dropped to 1lb lower than when we were last successful."
I'll have a good look at this in the morning I think!
Champion Hurdle
What a treat we have here!  Loads of contenders, three former champions (Binocular, Hurricane Fly and last year's victorious Rock on Ruby, who sports blinkers for the first time tomorrow) and the exciting Countrywide Flame, who I had at 45/1 for last year's JCB Triumph Hurdle and who I have backed antepost for this race at around 13/1 (having had some at 20/1 last month but most over the Christmas period at 11/1 before Darlan blew him away into fourth when he went off 6/4fav for the Christmas Hurdle).  Paddy's money back if Hurricane Fly wins looks tempting so I'll be going for Zarkandar to give Paul Nicholls his first win of the festival (incidentally I also think is worth backing the champion trainer to beat Henderson and Mullins this week at 7/1 as Nicholls has a fair few opportunities, particularly in some of the less glamourous races)
Cross-Country Chase
15 year-old A New Story finished runner up in this last year at 20/1 and is best-priced 20/1 to win it tomorrow.  Carrying 10-4 off a mark of 135 and with jockey AP (not that one - this is Mr AP Heskin) taking three pounds off thanks to his claim, it is worth a romantic couple of quid each way.  As Paul Kealy warns in today's Racing Post festival special though, "bear in mind that last year's ground was rock-hard compared to what the runners will face tomorrow".
Mares' Hurdle
Quevega is in my Super Yankee as above and without the presence of her male counterpart Big Bucks is probably the banker of the week.  Une Artiste to finish behind her.
Novices' Handicap Chase
The last race of the opening day and I've seen The Druids Nephew being tipped up all over the place today so will have to get on!  Sam Waley-Cohen takes the reins of Radjhani Express at the top of the weights, but takes off a handy 5lbs via his claim as an amateur jockey.  His ride at Kempton on heavy ground looked professional enough to me, albeit at a much lower mark of 129, and at 28/1 with Bet Victor is more than a speculative each way bet.  He comes from the same sire, Presenting, as festival favourite Denman and my personal weekend hero Soll, who contributed to the £700 lucky 15 win above and gave me impetus for the week ahead.
Best of luck - see you on the other side of the roar!  I cannot wait.
Posted by David Plane at 23:12