‘There’s more to life than Cheltenham’

Following a sublime, supreme ride aboard Vautour in a sublime Supreme Novices’ Hurdle, that was one of the first things Ruby Walsh said to Alice Plunkett when summing up his 39th career Cheltenham Festival victory this afternoon.

Ruby was referring to the fact that while he was celebrating, Jason Maguire was suffering, having been airlifted to hospital following a fall at Stratford yesterday.

I’m not going to say that other sports do not have moments of heartfelt humility like the one displayed by this living legend live on television today, but you’d have to have a strong argument to convince me that horse racing isn’t quite peculiar in its combination of competition, compassion, cruelty and class.

Adversaries get changed into tribal colours in a shared weighing room, more than just a dressing room.  They are paraded in front of punters who pray that their performances reward them with pounds and pennies. These jockeys work for various owners and employees, trainers and tacticians, often switching allegiance as regularly as they switch animal: one man’s rejected ride is another man’s Champion Hurdler.   Walsh and Maguire line up against each other on a regular basis, but in racing, rivals also stand together.

They slug it out; but after battle, immediately shake hands.  Tempers may flare, the spirit of the contest gets the better of its protagonists from time to time, but these guys are participating in a professional pastime in which it’s not unusual for animals or humans to end up hospitalised.

As my granddad said to me at the weekend: it’s the only sport where the players are followed around by an ambulance.

Our Conor was fatally injured in his fall at the third flight in the 3.20 today.   Just a year ago, we watched open-mouthed as he destroyed the field in the 2013 Triumph Hurdle on Gold Cup Friday.  I stood next to his trainer’s son, champion flat jockey Richard Hughes, who has achieved so much in the game himself, and he was buzzing like a bee in the winners’ enclosure, having witnessed a warrior at work like the rest of us.  This year, Our Conor’s owner has been pledging all the prize money his big white-faced horse has been collecting.  As Sam Twiston-Davies says in this RP blog, you’d have thought he would have got a bit of luck.


Read to the end of that piece, by the way.  STD refers to Aidan Coleman and Nick Scholfield as his friends, not as fierce foes.  What a tapestry this is.  Later in the week, Sam will be on board Big Buck’s, lining up against his pals for another boss, a boss who also just happens to be battling it out for a different title with his own father!

Ruby continued in a similar vein his interview earlier on, referring to his mate Tony McCoy, whose son was in the Portland Hospital having an operation earlier in the week:

‘You can make too much of all of that [the pressure]… this morning was a cold and timely reminder when you look at Jason Maguire that there’s a lot more to life than riding winners at Cheltenham… AP showed me a picture in the weighing room before the race of Archie and you think to yourself Jesus, thank god my kids are alright at home.

You can make too much of Cheltenham – it’s a big week, but there’s more to life than Cheltenham’

So it puts all of today’s gambling events into perspective really.  Which is lucky, as it wasn't a day to tell the grandkids about from a betting standpoint!  I did have a 25/1 placer with David Pipe’s The Package returning some decent profit in the first handicap of the festival.  Pipe had already got on to the trainer-of-the-week score sheet, though, with a surprise 33/1 head-bobbing victory by Western Warhorse against Champagne Fever in the Grade 1 Arkle Chase, denying Ruby Walsh his first Cheltenham festival chase success since Kauto Star’s 2009 Gold Cup.

Losses were incurred towards the end of the card as I noted a Pricewise selection, Festive Affair, who was advised at 16/1, drifting out to around 30/1 before the off.  Remembering a similar situation last year, I followed the price out with increasing stakes, hoping Affair might mimic the Flaxon Flare.  But sadly, it didn't! 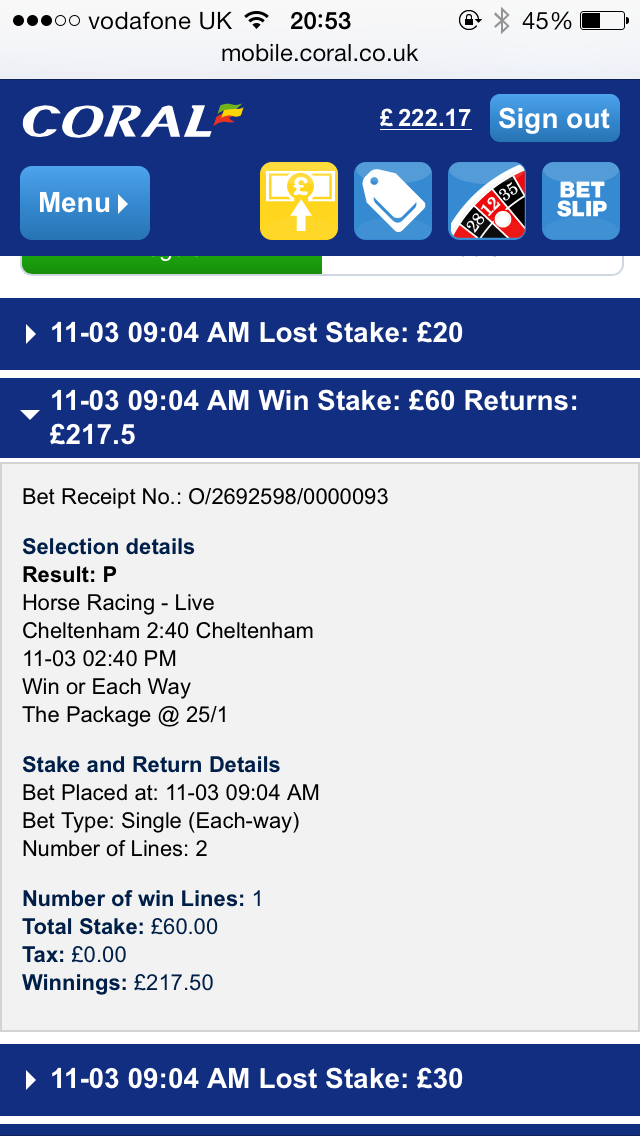 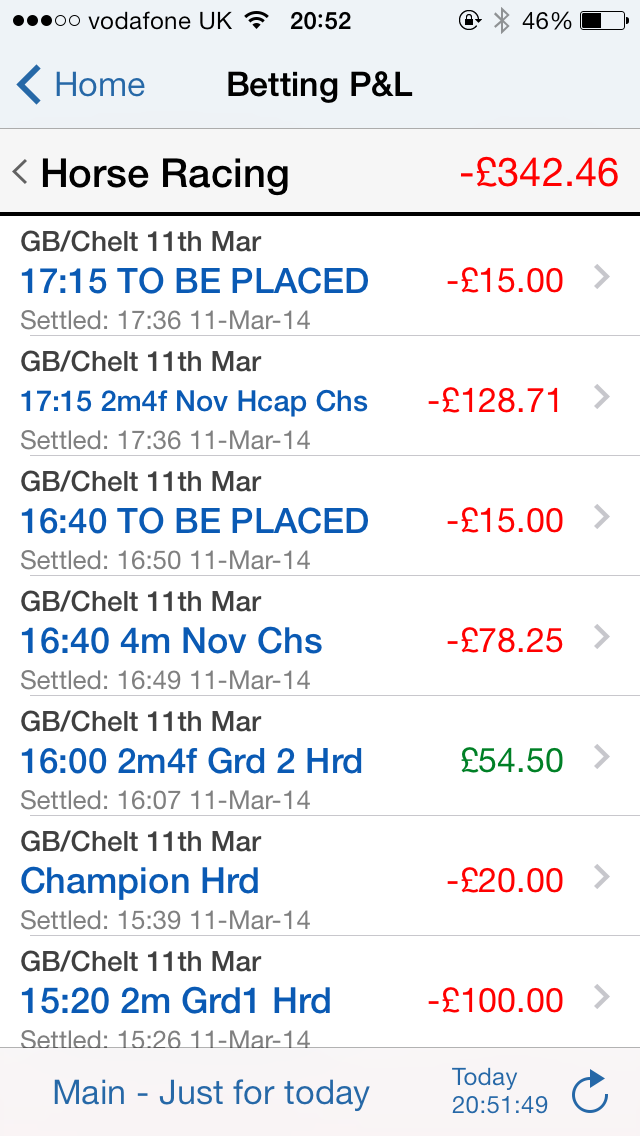 Ruby did reach the big festival 4-0 in the four o’ clock, however, and as predicted held aloft two sets of three fingers in victory, each digit denoting a demolition job by wonder-mare Quevega, whose name everyone seems to pronounce differently to Ruby himself! 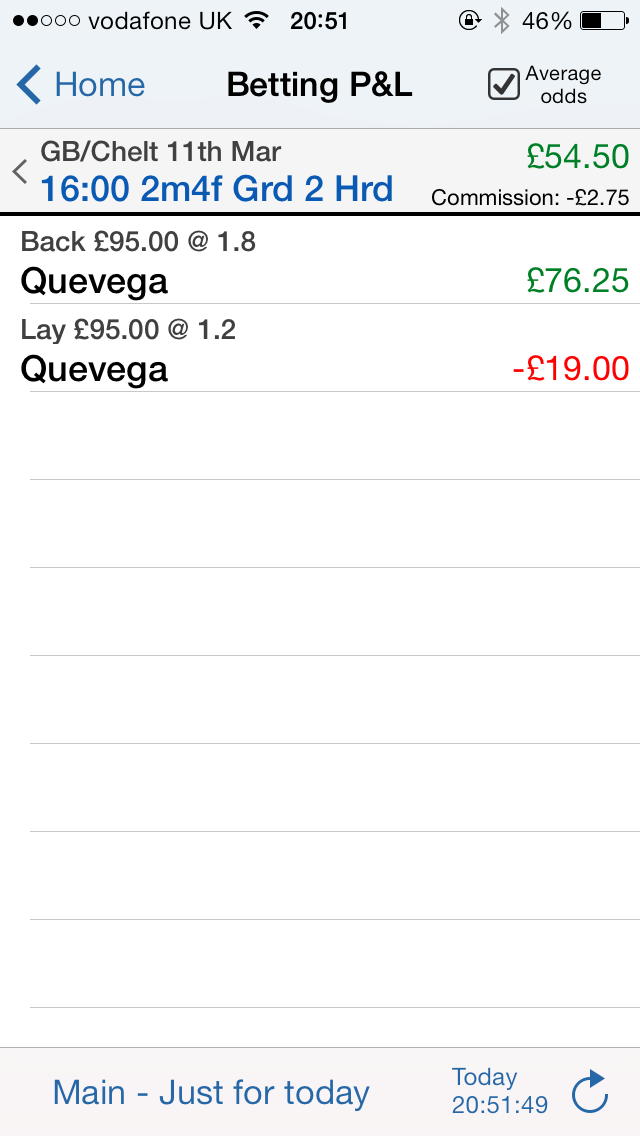 Looking at tomorrow’s card, I was struck by the amount of silks bearing the colours not just of McManus and Ricci, but of Andrea & Graham Wylie too, who are represented by no fewer than five in the final two races, neither of which feature on channel four, but the finale of which they triumphed in last year, with this year’s favourite Irish hope of the week, Briar Hill.  Phew!

And this is what I mean.  Ruby Walsh rode Briar Hill for the Wylies last year at a ridiculous price of 25/1 in the Champion Bumper, and partners Shaneshill tomorrow with the same owner/trainer combination and a price of 8.4 on Betfair right now.  He was adorned with the same browny-beige colours when on board Tidal Bay in an heroic Lexus Chase last Christmas for his old boss Paul Nicholls, who will be trying to win the Fred Winter tomorrow with another two Wylie horses against, yes you’ve guessed it – Ruby Walsh and Willie Mullins on yet another Wylie one!

The merry-go-round of racing is a wonderfully rich and diverse spectacle of owners, trainers, jockeys, pundits, punters, writers, bookies, braggers and blaggers.  At its heart, however, is a unique humanity that you simply don’t find anywhere else in sport.

RSA:
Smad Place for Alan King, and Paul Nicholls to get off the mark for the week with either Sam Winner or Just a Par.

Coral Cup:
Far West to put the fall at Newbury last month well behind him, and the other Axom horse in the race, Edgardo Sol, who is partnered by claiming jockey Harry Derham (3)

Champion Chase:
Some offers for Sire de Grugy at 4/1 are very tempting, and it would be a fantastic story for the Moore family, who are real gems in racing’s glistening crown.  I am going to give Wishfull Thinking another spin too.