I've not had to single out an officiating performance for a while now, and whilst we got a well-fought victory at Stevenage today, I still wanted to get these few points across while they were fresh in my head.

Today's refereeing performance started off as an annoying but oft expected "homer", with the man in the middle seemingly walking in fear of Stevenage's many brutish ball-hoofers, but descended into farce in the second half, when both sides had reason to be aggrieved with Darren Sheldrake. 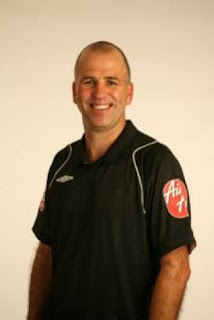 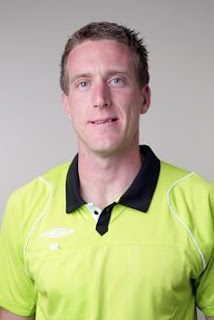 Only Orient, however, had cause to bemoan fourth official Ian Crouch (right). Crouch was apparently scrutinising Ben Chorley's 45th minute challenge with such an eagle eye, whilst at the same time operating the electronic board on which he was simultaneously holding aloft a signal of a minute's additional play, that he was able to advise Sheldrake (left) to produce the red card.

This added insult to injury as Orient had been trying to outplay Borough for the first 45 minutes - a task about as difficult finding the bald spot on Russell Slade's head - and were regularly frustrated by Sheldrake's inconsistent decision making.

Within minutes of kick-off, Stevenage's 6-foot 2-inch centre-half half-wit Jon Ashton was mouthing off at David Mooney, right in his face, physically accosting our lone striker and clearly using excessively aggressive intimidation tactics.  This was allowed to continue and set the tone for Stevenage's gameplan, which Sheldrake was happy to tolerate.  http://www.stevenagefc.com/page/ProfilesDetail/0,,10839~9840,00.html

On the left-side, the fourth official's side, our goalscoring midfielder Lee Cook was subjected to a stud-showing high boot from 6-foot 4-inch non-league graduate Michael Bostwick http://www.stevenagefc.com/page/ProfilesDetail/0,,10839~36331,00.html and again, Sheldrake didn't penalise him.

Most annoyingly, 6-foot (are you sensing a pattern here) Chris Beardsley, who plays a brand of "football" about as beautiful as his Geordie namesake, left a foot in on Leon McSweeney, and got a friendly talking-to from the referee and a loving touch on the arm... but nothing more than a free kick for us.  Beardo then went down clutching his face after an innocuous tussle with Ben Chorley, which gave fourth official Ian Crouch his cue to interfere and point the finger of doom at our centre-back, who along with Scott Cuthbert [MOTM], was doing a great job in a makeshift back four.  http://www.stevenagefc.com/page/ProfilesDetail/0,,10839~23260,00.html

To even it all up after the break (Darren had obviously been thinking deeply about his many mistakes), Sheldrake gave SBFC sub Chuks Aneke a straight red for a high foot that in the first half would probably not have even caused him to draw breath, let alone blow his whistle.  That, as per usual, was the main issue with the officiating today - inconsistency - it's just so annoying for the spectators, and even though both teams finished the match with 10 men, both sets of fans would not have been happy with the refereeing performance.

Do you remember any other shocking decisions from the match?  Lisbie's booking near the end of the match perhaps?  Your comments and thoughts are welcome and appreciated!
Posted by David Plane at 19:38