Betting on Golf to Compile a Palphabet Portfolio

Ah the weekend.  Time to leave the responsibilities of selling medical device products behind me and embark upon a bumper three-day break where I can fully focus on the markets.. Particularly since my wife-to-be, Mrs Palphabet, is away on her hen-do, most probably baking cakes and singing hymns with absolutely no male-strippers in sight.


I want to talk about golf.
I have never broken a three-figure score.  My dad, my younger brother and my little brother are all decent players, but over the past month I have won more money gambling on the game than they have.  I am no longer the black sheep of the family.  I am the black bull of white-ball betting.  I am blowing through my ringed nose and brushing at the dust with my hefty hoof, weighed down by wonga.

When I compile my weekly golf portfolio, I religiously do two things.  I wouldn’t say that I am necessarily religious, but when it comes to golf, I’ve found myself becoming more spiritual as the competitions roll on and the prophet of profit becomes more apparent.


Firstly, on a Tuesday, I download and listen (at least once) to the William Hill Golf Podcast, which is expertly put together by Lee Phelps ( @leephelps ), hosted by Dave Kelner ( @dkelner ) and superbly supported by Mike Grenham ( @mgrenham ).  I have to listen to it a couple of times because I normally plug in the Dr Dre earphones when I bed down, and I usually fall asleep to the laid-back groove of the theme tune, not because the lads are all northern and their easy accents soothe me into a slumber.  You can find the podcast here.


Next, I bound eagerly into my local ‘paper shop and pick up Wednesday’s RP, where Steve Palmer’s piece(s) provide unmissable insight into the US and European tour competitions.  Occasionally I miss the copy in the newsagents and have to beg my local Ladbrokes or JenningsBet to let me have the back pages at the end of the day.  I think they find me slightly odd.  This article shows why I am anything but.. although maybe makes SP look a bit weird!


I see these activities as a ritualistic must.  The optional extras come by way of my mate Tom Clarke’s excellent Golf Monthly column, which can be found here, and through discussion with my pal @paolobow, who is a keen follower of Mr. Jeremy Chapman ( @jeremychapman3 ), an authority on the game from back in the day, who still comes up with the goods.


Armed with all of this information, it’s time to make my selections.  When the stars collide and more than one of the above pick the same player, I get rather excited.  It’s time to go in big.  Otherwise I basically follow Palmer’s selections, although maybe not quite as heavily as he advises large stakes on short-priced market leaders, and then supplement with a couple of my favourite golfers.   For courses that demand accuracy off the tee, I like Westwood and Garcia.  When the par-fives are plentiful and power is a prerequisite, but precision is preferred I might go for Nicolas Colsaerts or Louis Oosthuizen.  For wide fairways that sympathise with flamboyancy and inconsistency, I like Alviro Quiros and Rafael Cabrera-Bello, who often start at big prices and are very tradeable if they get off to a good start, better still if they make the cut.  Likewise, I often back John Daly at huge three-figure prices and hope he puts together a good round on the Thursday.   Seung-Yul Noh is a genuine favourite of mine.. I tend to back him every week he gets involved, regardless of the track, which probably isn't particularly wise.  He’ll bring home the bacon soon though, I’m sure.


As well as the characters involved, the statistics available are great too.  Ball-striking is one I really enjoy looking at.  'What golfer can’t strike a ball well?' I used to ask.  Well, this is actually a hybrid stat combining figures for driving distance, driving accuracy and greens-in-regulation (getting on the putting surface with two putts to make par) and is a gem for making your choices.  In fact, think of stats as your punting caddy, whispering words of wisdom in your ear, encouraging you to attack that tough pin position.


At Kiawah Island for this year’s PGA, for instance, distance was very important.  With 7,800 yards to cover, so was scrambling – saving par when you miss finding the green-in-regulation.  Rory McIlroy looked huge at 19-1 given that these statistical strengths are key features of his rock-solid game.  Tipped up by Steve Palmer, Dave Kelner, Mike Grenham and Jeremy Chapman, what more could a punter ask for?  I expected to turn to my horoscope and read "Get on R-Mac, you crazy half-man half-beast Sagittarian.. what other pointers do you need??!"
He won by eight shots, destroying the field at the tough Pete Dye designed golf course.

In-play golf is great for gambling too, as the market often overreacts and regards a lead going into the final round as a reason to send the odds nosediving towards odds-on.  Laying Adam Scott at the start of the final round of this year’s Open, and going in again throughout his excellent front-nine, meant that (although not winning much when you include the money on top-5 finishes), I came away from the heavy betting weekend unscathed.  Backers were still supporting him at 1.05 (1-20) on Betfair, trying to take advantage of 5% returns unavailable with high-street banks, but finding themselves stuck between their very own Northern Rock and a hard place (if they backed each-way).   It seems that most golfers wobble when entering the final round of a tournament at the top of the leaderboard, unless their name starts with a 'T' and ends with 'iger'.
Opposing Jim Furyk at the WGC Bridgestone Invitational at 2.36 won me £71.85, covering 3 points worth of initial investment as he failed to capitalise on a strong position.  Similarly, going against Robert Garrigus at the Canadian Open meant I won £3.20 after commission, rather than losing well in excess of a hundred quid.

Of course, the tactic of laying a short-priced leader doesn’t always work out, especially when the players you’re praying will fail are fully-paid up members of the God-squad.  As I said before, I’m not religious, and sometimes that counts against me.  Here, I tried to lay the hell (sorry Zach) out of Johnson, and credit to the lad he did his best to help me in the exciting playoff with Troy Matteson, finding the water to the left side of the hole before eventually winning with a wonderful 190 yard 6-iron bunker shot that cost me over £400.
As well as following the Twitter handles I've already plugged, I recommend using the Golf Channel's website and app to stay abreast of proceedings and using www.oddschecker.com to get the best prices, as they can vary enormously between firms and exchanges, especially when backing each-way.  Finally, find a few like-minded golf-betting buddies with whom you can sing the various tunes that Sky Sports use to punctuate their golf coverage - great "beds", as I believe they're called in the broadcasting game.
***﻿
Tonight, as I type, Roberto Castro has just aced the 14th, Sergio Garcia and Vijay Singh are right in contention at The Barclays, held at Bethpage State Park in New York, and Nick Watney looks to be the lay of the weekend.  Tiger is battling through pain, looking ominously placed and smiling with the aforementioned bible-basher Johnson, whom he used to (allegedly) torment with pornography when they roomed together on tour.

All this enjoyment from a game that Happy Gilmore once described as requiring “goofy pants and a fat arse”.  I enjoy playing and watching golf, but I love betting on it. 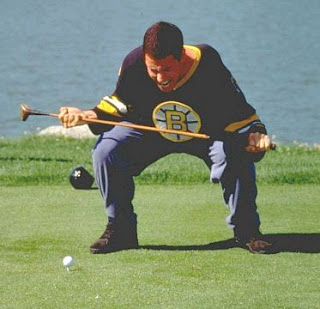