To which page in your copy of the Racing Post do you most eagerly turn as you open the crisp inky paper or flick digitally across the cool glass of your tablet device?  If Segal is making an appearance, as he did yesterday and Friday with more successful selections for stalwarts of his suggestions, I head straight to his column.  Richard Hughes has been my next port of call over the flat season, followed perhaps by David Ashforth, whose hilarious musings never fail to entertain and amuse.

After those pages have been perused, though, I'll head to see what horses have gubbed the punters on the previous afternoon.  "Yesterday's Highlights", they somewhat disingenuously subtitle the section (although to be fair, they do draw one's attention to the huge in-play prices that winning horses could have been backed at too), this little grey box has not just got my goat this morning, it's goading my goat.  Grrrrr. 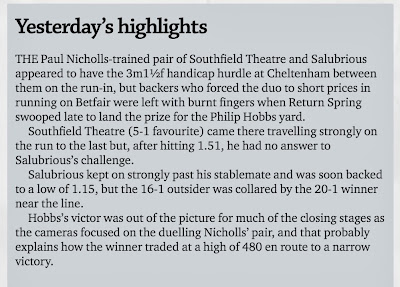 I didn't have huge confidence in Salubrious yesterday, and even less so after reading his trainer's unenthusiastic but frankly realistic appraisal of his chances in his excellent and insightful Betfair column.  But with some sentiment - Salubrious provided a 17/1 Cheltenham festival winner for this blog when he claimed the Martin Pipe Conditionals Jockeys' Handicap Hurdle in March - I thought he was worth an each-way bet at 14/1 yesterday and was encouraged when Segal picked his stablemate Southfield Theatre as I reckon Paul Nicholls' yard is being underestimated by the layers at present.

It's a genuine sign of the magic of this sport though, that when I watched the replay of the 3.00 handicap hurdle on Sky+ last night, I couldn't help but be moved by James Best's tearfully emotional interview with Alice Plunkett after he nicked the Nicholls' pair on the line to score at 20/1 on board Philip Hobbs's Return Spring.  It would have been splendid to have taken the full spoils from the scintillating sprint up the famous Cheltenham hill, but the sport rightly took centre stage ahead of my meaningless P&L spreadsheets: 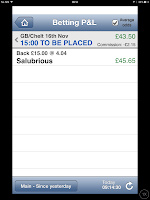 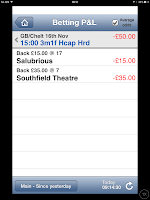 On the whole, it was a profitable day's punting, with a 3pt stake on Champagne Fever looking about as safe as the debut chaser's jumping looked competently assured.  I did set an unmatched lay before the off, which as you can see was matched shortly before the second last fence, just in case.  Ruby looked very happy on board as it completed a quickfire treble for him at the start of yesterday's Punchestown card, and he's surely going to be even more delighted when he guides Hurricane Fly to a record breaking 17th Grade 1 victory later today.  My £20 double on the Mullins bankers returns just £12 profit - a testament to the high esteem in which they are both held by the bookies.  Segal's tips of Fergal O'Brien's Bradley and Alvarado in the 1.50 at Cheltenham were confidently conveyed in his column and the latter proved him correct, causing me to collect :) 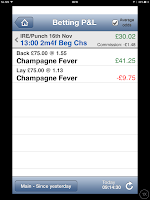 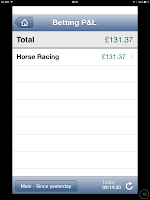 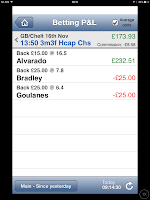 Onto today's racing, and I do really fancy Paul Nicholls to have a fruitful afternoon, not just at Prestbury Park, but over in Sussex at Fontwell too.  It would really set the scene beautifully for Saturday's hotly contested Betfair "Lancashire" Chase if Silviniaco Conti's stablemates return to Ditcheat later today, full of beans, neighing merrily, and send him up the M6 next week with loveable nutter Tidal Bay raring to take on Bobs Worth, First Lieutenant, Long Run and Charlie Hall Chase winner Harry Topper.

1.00 Cheltenham - Pay the King - Bumper winning Nicholls horse with Harry Derham taking off three pounds.  Lieutenant Miller has been out and about as a flat stayer this summer, notching up victories under Tom Queally and Graham Lee before coming a creditable third in the Cesarewitch priced up at 10/1.  Holds less betting appeal at 4/1 this afternoon but is the clear alternative to 15/2 shot Pay the King.

1.35 Cheltenham - Lac Fontana - Clifford Baker's dark horse popped up in my At The Races "Tracker" email this morning.  A 7/1 shot in a small field, worth a small bet as Sea Lord and The Liquidator hog the pre-race headlines.

2.10 Cheltenham - This is a tricky one, with Raya Star, Dodging Bullets and Ted Veale all there or thereabouts in the betting.  Probably the one Nicholls will win with DB, as I am siding with Cheltenham Festival winner and useful flat performer, Teddy V.

2.40 Cheltenham - Just wonder if former Nicholls horse Tataniano isn't worth giving another vote of confidence at a big outside price of 22 on Betfair.  Wearing the famous red and white colours of Big Buck's, he's a memorable horse, although I dug out this article from 2010 that Mr Nicholls would probably rather forget!

2.55 Fontwell - Benvolio (NAP) - With Ruby Walsh off the books at Ditcheat, I think the line up of jockeys should be able to be compared with the squad of Tottenham Hotspur this year.  Losing a superstar, but gaining a balance.. Sadly for Spurs fans, they are playing dreadfully dour football, while Nicholls has at his disposal his number 1 Daryl Jacob, claimer Harry Derham, a pumped-up Twiston-Davies and one of my Twitter faves, Nick "Melodic Rendezvous" Scholfield, who takes the reins on this even money banker today.  I know who I would rather be watching ply their trade this term and it's not the scum from Edmonton!

3.15 Cheltenham - Flaxen Flare - easy one for me this as FF gave me a huge 31/1 boost on Day 3 of last season's festival.  Was 12/1 this morning, but has been clipped into around 8s since Segal selected him again, lauding his trainer Gordon Elliott and describing today's conditions for the four-year-old as "perfect".

3.50 Cheltenham - One last Nicholls stab - Southfield Vic - same colours and close relative of the aforementioned near-misser from yesterday, and PFN seems more confident about this one than he did about that!

Over in Ireland, blog favourite and new Racing Post columnist Bryan Cooper has a good book of rides, picking up strongly-fancied Don Cossack from the banned Davy Russell in the 1.40 Novice Chase.  While the only bet I've had over there is on Hurricane Fly in the fourteen-fifteen formality, why not have a look at this blog from my Twitter pal Steve, as he seems to have a good handle on things over the water.