An abridged version of this piece can be found on www.golf-monthly.com where I am fortunate enough to be a weekly blog contributor - the past eight weeks have all yielded profit and perhaps the added focus on the little white ball is bearing fruit http://www.golf-monthly.co.uk/tours-and-news/opinion/tour-talk/531437/golf-betting-blog-dave-plane.html

It’s not been a week for the weak: an emotional rollercoaster that has asked questions of this passionate punter and self-styled bon viveur.


I spent Friday night in amongst the [largely] peaceful protesters in Istanbul’s Taksim Square, where European tension could be felt in such abundance you might have been forgiven for thinking you were back around the 17th green at Medinah (if the Ryder Cup venue had been frequented by masked graffiti artists jubilantly jumping around atop burnt out public vehicles). 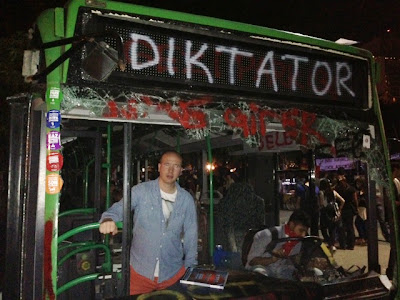 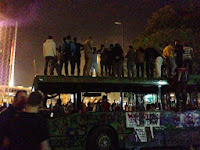 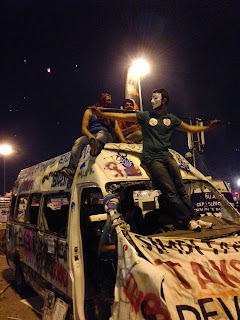 I hadn’t really been able to gamble in Turkey.  I mean, I was able to get a raft of bets on with Stan James on my mobile, but Betfair’s app repeatedly flashed up the error message: “User Restricted Location”.
There I was, stressed out trying to get the best possible prices at 2am Turkish time, making an international call to one of the exchange’s helpful customer service representatives, all to get my ultimately unsuccessful £150 down on Bernd Wiesberger for the Lyoness Open. 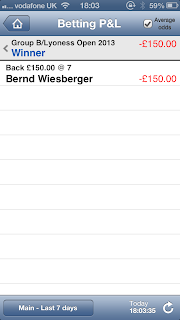 ﻿
I added Tom Lewis to the portfolio at 135/1, who started flawlessly but failed to capitalise, and followed the Racing Post’s in-form golf tipster Steve Palmer in on Joost Luiten (20/1) and Romain Wattel (55/1), my confidence in the first of those picks later bolstered when I discovered that the William Hill podcast boys opted for the same player.


The pod was banned from the Turkish airwaves by the regime against which my comrades were demonstrating... they must have all been keen to have a hefty wager too?  And rightly so: Luiten won, Wattel placed – tear gas and water cannons would not have been required if I hadn’t been able to get on.

Arriving back into London on Saturday, I headed to Finsbury Park to worship The Stone Roses, whose reunion has made grown men cry and whose masterful set-list resembled something close to perfection.  I've not stopped listening to the eponymous album since the weekend and memories of Made in Stone and This is The One have got me dangerously too close to welling up for a man in his early thirties. 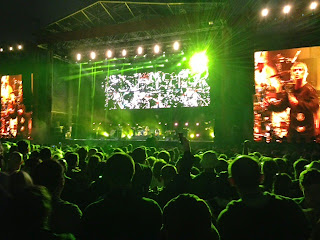 And then, on Tuesday, heart-strings continued to be plucked like an eerie John Squire melody with the extremely sad news of the death of legendary racing trainer Sir Henry Cecil.   I have not been into racing for long enough to fully appreciate the majesty of Sir Henry, and am not the expert equine historian that many of my readers are, so reading the sincere and celebratory tributes to the great man this week has given added poignancy to the little I do know about Cecil.
I was privileged enough to be in his presence on three or four occasions while following Frankel around Ascot, at Champions Day 2011 and '12, and what struck me was this tall, authoritative man's gentle nature, his mischevous sense of fun and humour and his absolute devotion to his craft.  I have a couple of pictures I snapped while standing only a few feet away from him, which I am particularly proud of: 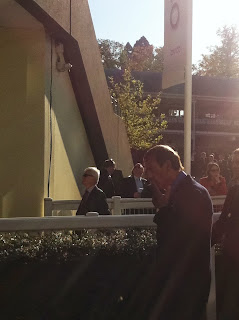 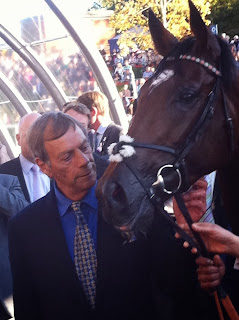 Last October, he was signing autographs outside the main stand around the parade ring and I was so tempted to go and get a few moments with him, but whilst he was greeting fans with genuine pleasure and humility, he looked frail, was with his family and I decided to let him get off and in position to see Frankel fly to what would be his last race.  In some ways I regret not telling him what, in a short period of time, he has done for my love of horse racing; but in another way, I felt like just walking amongst people with whom he clearly felt a natural affinity - he knew.
I hope you don’t mind me punctuating this light-hearted piece with a genuine mention for the great man: rest in peace, Sir Henry.
***
Moving onto this weekend’s Major, my headline picks are Manassero, McDowell and Woods.  I was excited by Mickelson at the weekend, who I backed for the FedEx St Jude before the final round, whilst laying Stefani and Stallings at short prices, partly covering pre-tournament wagers, but I'm yet to add him to an already bulging US Open Portfolio. 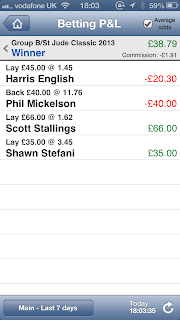 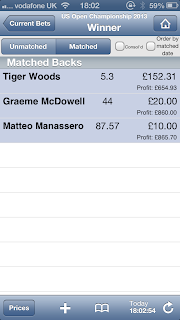 In addition to the main bets - healthy stake on Tiger and mouth-watering prices about MM and G-Mac, I've got the following players on-side, with my own picks denoted by the asterisk and the players I'm following on the advice of others (namely Palmer and Mike Grenham from Billy Hills) listed below. 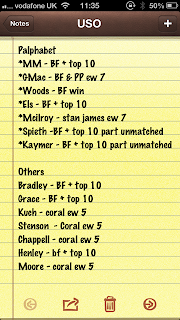 Plenty of tipsters seem to like the chances of McDowell, so the fact I am on at 43/1 is especially pleasing.  The short, par 70 course has been made into more of a target track due to the inclement weather conditions that everyone has been banging on about, and I think that will help Matteo.  The young, articulate Italian isn't particularly long off the tee but is deadly accurate out of the gates with the driver and he can make that attribute count on the tight fairways with the irons.
I've mentioned Lefty, but I'm concerned that Big Phil the Thrill is slightly too wayward with his driving accuracy (ranked 160th on tour hitting only 330 out of a possible 613 fairways).  The rough here will be punishing, as will pin positions, as the tournament organisers seek to make the contest as tough as possibly in response to the rain, and while many have been saying that Mickelson will "love the course" and go well here, I'm not so sure.  The player that worries me more is Rickie Fowler.  I'm not going to back him, but I have done so for The Open before.  I've seen and heard him tipped up on GolfMonthly.com and by Jamie Spence on the WH pod, and think his price and chance are pretty good.  I will be keeping an eye on the flamboyant young man, who has memorable Merion experience from his 2009 Walker Cup triumph, and will be motivated by the opportunity to secure another winner's medal this weekend.
So here we go: US Open podcasts downloaded, official PGA app installed, bookmakers’ offers scrutinised, RP iPad edition purchased and Golf Monthly microsite adorning my desktop.  I’ve even started following another tipster on Twitter, who seems to know his onions: @NicsPicks
A weekend of high-octane golf gambling awaits... if my emotions can take it!