Palphabet's Summer of Love... Loving It

It’s been an interesting summer at Palphabet HQ, dominated by both the attending and planning of stag weekends and weddings.  My brother got hitched, my pal Mowells endured a highland game themed send-off into marital bliss and just this weekend my old housemate Dicky aka Turps / Uncle Fester / Dot Cotton etc tied the knot up in Doncaster.  Love is well and truly in the air.


This would normally leave little time for keyboard-bashing, but coupled with the fact that I am also getting married next month, and it’s been pretty difficult to sit   down and write anything on here.  Then I saw that Scott Ferguson was flexing his influential blog-community muscles, perhaps in frustrated response to his country’s dismal performance thus far at the Olympics, so I thought I better post something. I’m off to the Olympic Park this afternoon to watch Andy Murray v Roger Federer on the big screen before heading into the stadium for the finals of the women’s 400m, the men’s hammer throw, and the blue riband event, the men’s 100m dash.  Do they still make Blue Riband chocolate bars?  I enjoyed those.

Watching Mo Farah on TV last night was emotional – he was on the bridle the whole way round and on that final lap demonstrated a rapid turn of foot with such assurance that my 4pt stake at evens on Betfair was never in doubt.  My pokes into the SPOTY market also look in reasonable shape.  Yes, Wiggins appears a certainty, but his price has drifted from 1.12 to 1.42 over the past few days, and I simultaneously layed him and snapped up £37 of Mo at 24s, which should provide ample trading opportunity as the months roll on and the collective idiocy of the British public phone up and vote for a Ryan Giggs-esque character. 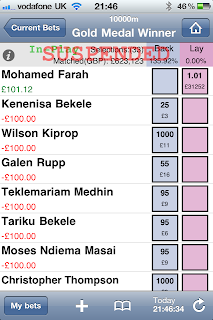 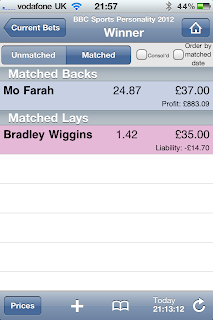 The Olympics on the BBC have been wonderful.  The theme tune is sublime and the coverage has been a joy to behold.  Kudos also to the Sky+ team, who have updated their iPhone App with the requisite BBC channels dedicated to broadcasting every event of the games in a show of stunning broadcasting commitment.

But one word of dissatisfaction.  Have you noticed this not just creeping, but dive-bombing into the audio commentary: “I’m sat watching the handball...” or “I’m stood here with so-and-so” ?
It’s “sitting” and “standing”.  Mark Chapman is excellent in so many ways, but his insistence on using past-tense terminology to describe something he is currently doing is irritating at best, abysmal at worst.  I’m all for regional presenters reaching the pinnacle of their profession, and I’m no fan of received pronunciation, but this lack of respect for the English language is grating.  Beeb: Sort it out.
***
In more positive news, I’ve been delighted to see the return to form of Tom Segal over the past few weeks.  His Glorious Goodwood form has been gloriously good and has provided a couple of much needed wins to counter a few weeks of dearth.  Laying Adam Scott in the Open felt like a massive win – I was exposed to the tune of over £500 if he had prevailed – but I was also gutted for Scotty and in reality my only “winnings” from that event were “not losing a monkey”.  He has bags of talent and played beautifully for 68 holes on the Lancashire links.  Presuming he’s reading this, I would advise him to ditch both the ridiculous long putter and his caddy.  He has the grit to bounce back and compete again in next week’s US PGA, for which he’s trading at 33-1.  Louis Oosthuizen is currently in contention at the WGC Firestone but a six-and-a-half-grand windfall looks out of reach following Rafael C-B’s horror show third round seven-over-par yesterday. 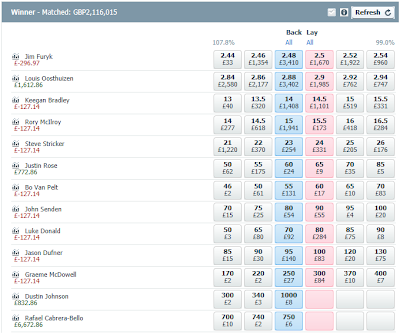 Finally, a word for Frankel.  In his season as a four-year-old I have had my biggest and smallest ever single bet on him.  Whether at 1/3 or 1/20, it's nice to be on!  Both gave me huge pleasure and I’m certainly intrigued and exhilarated by the prospect of seeing him step up in trip.  His wonder-sire, Galileo, must be very proud, if you permit me a momentary anthropomorphic indulgence. 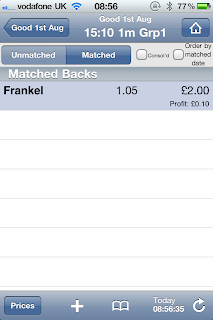