Palphabet's Day on the Derby Downs

May has been an excellent month on the exchanges for Palphabet - and the Lucky 31 bets that I used to eschew in favour of a straightforward accumulator have proved a revelation.  Golf tipsters Steve Palmer and Jeremy Chapman from the Racing Post, as well as podcasting punters Dave Kelner and Mike Grenham have also inspired me to four profitable weeks off the tee: a turn in fortune that I attribute wholly to the upbeat nature of the William Hill podcast's theme tune. 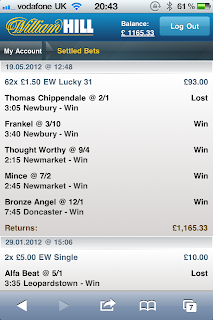 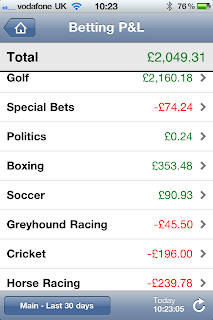 The tunes of Eurovision were not quite so successful, as I took the view that Sweden were too short at a shade over evens, but I made up for it later that evening (and also recouped losses on the Greyhound Derby) by backing Carl Froch to win by KO, laying the fight against Lucien Bute to go the distance and correctly predicting that by whatever means, the bout would be won by the Cobra.


I also unsuccessfully layed England in both test matches at short odds and won just under what the Americans would call "a quarder" by greening up on the London Mayoral elections after trading the market during last year's captial city riots.  Profiting out of social misery is not out of the question for Palphabet.


I would now, however, like to turn my attention to this weekend's Derby, beginning by detailing an experience I had in Epsom just a fortnight ago...

Upon arrival at Epsom Downs racecourse for a recent medical device conference, where I was exhibiting titanium orthopaedic implants and precision-made powertools used for small-bone surgery (I do have to make a living somehow), I was treated to a panoramic view of the arena for this weekend’s Derby meeting free of the funfairs, fanfare and flutterers that annually frequent Surrey’s chalky formations in early June.

Avert your eyes northbound back towards London and from this vantage point you are afforded breathtaking views of the capital’s skyline, with the unfinished but still imposing Shard piercing up towards the sun from London Bridge.  It prompts a dizzying, rollercoaster ride of emotions for any racegoer, even if on this particular day the only horses in sight were those being given a gentle ride out from one of the 13 local stables, where trainers such as Michael Attwater, Roger Ingram or Pat Phelan ply their trade. 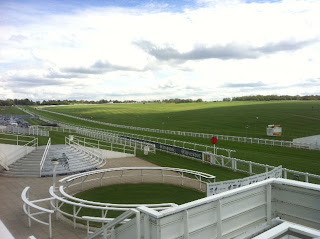 At these work conferences, there is often a fair bit of hanging around, so I took the opportunity to venture outside onto the stands and make a phone call.  Talking and walking I realised what was happening all around me: workmen busy erecting a marquee, a couple of young ladies carrying boxes of promotional literature from one building to another, grass being carefully mown, glossy white paint applied to railings, flowers being planted, the Investec Zebra trotting down a flight of stairs - Derby preparations in full swing.


I walked over to a chap in a cap.  His name was Shamus.  Some know him as "the flower-pot man" but, although his pruning and planting was evident around me, his knowledge stretched beyond petunias, and his passion was immediately Palphabetically palpable!   He's been off for 10 months with a back injury that has prevented him from carrying out his many tasks around the course and now many of the young executives wrongly "think I'm the new boy!"  But that could not be further from the truth.

Seamus is over the back there (left pic) and won't thank me for keeping the dying daffodil in shot! The flowers on the right will be resplendent in red, white and blue on Saturday 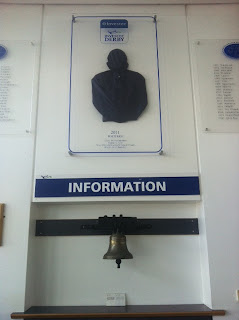 I chatted to Shamus for fifteen minutes or so, as he talked of the famous track's Derby course: the immediate ascent taking the horses and riders up a 180-foot incline, "the same height as Nelson's Column", he told me.  Undulations that wouldn't look out of place on a links golf course, with cambers forcing the contesting 3-year-old thoroughbreds from high to low ground while testing stamina, composure and heart.  Tattenham Corner's sweeping bend, a sight that Seamus has been able to see from his bedroom window since he was a little boy over half a century ago.  Then the straight, that home run of dipping turf, dripping in Derby day atmosphere.  Where Lester Piggott so often got his tactics spot-on, and where last year, Mickael Barzalona came from the back on Pour Moi, having hit 36 in-running on Betfair.   Shamus said he was so busy organising the buckets of water to douse the exhausted equine combatants last summer, that he didn't even notice the now iconic celebration inexplicably enacted by the youthfully enthusiastic Frenchman.  He wasn't too busy to show me Barzalona's winning jersey (above right), though, and could vividly recollect his favourite Derby winner of all time without hesitation: "Troy, 1979".


I got out into the middle of the track and looked back towards Tattenham Corner from the winning post: 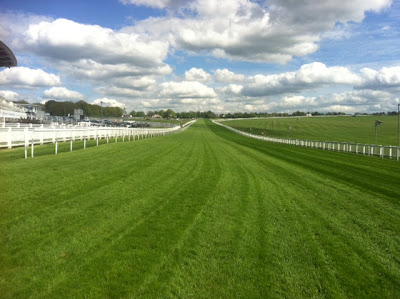 This Saturday, I am hoping John Gosden and William Buick can follow up last year's St Leger win with Masked Marvel, by overturning the 2000 Guineas winner and clear favourite, Camelot, who is best priced 4-6 with Paddy Power.   As I started writing, Ballydoyle's hand was exceptionally strong, although with Imperial Monarch looking bound for Chantilly.  At the final declarations this morning, however, Aidan O'Brien's initial quintet of runners, which I thought would be reduced to a 'mere' quartet comprising Astrology, Father of Science, Tower Rock alongside their Classic-winning stablemate, is now just a double act:


I have layed the market leader for one main reason.  Namely that Joseph O'Brien talked of his Guineas tactics at the weekend in an excellent interview with David Walsh in the Sunday Times, and I'm just not convinced I buy it.  Camelot only won by a neck from a field that was not exactly drawing superlatives from the lips of the pundits and whilst I acknowledge that JOB is a talented individual, who seems to possess the calmness of Roger Federer, with a similar ability to keep the sweat at bay, this is his sternest test yet and he will not want to get stuck at the rear, even if he does harbour thoughts of a MB-style fist-pump (unlikely).


I was more than happy to back Frankel two weeks ago at 3-10, in the same way that Big Buck's looks value at 1-4 and Black Caviar more competitive than all cash ISAs, often returning a 5% return-on-investment when bookies down under have been generous enough to offer 1-20.  The Derby is different, though, and I'd rather oppose the tide of support for the father-son champion elect.


Having said all of that, Camelot is a classy unbeaten Montjeu colt boasting unbeaten figures of 11-1 with a blistering turn of foot and will undoubtedly stay the trip, with Lester Piggott himself saying that all young Joseph has to do is "steer him round the course" and many quarters of the press seeing it as a foregone conclusion, especially in a field with the fewest number of racers in over 100 years!


Still, at that price I'll happily be taking him on and have ploughed into Thought Worthy, covering all other eventualities with the initial Camelot lay: 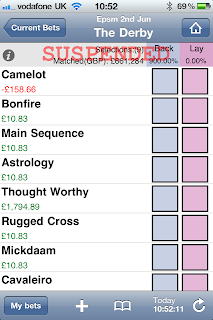 Ryan Moore, who was scathing in his attack on what he perceived as unworthy entries in this race last year, when he disappointed on the Queen's horse, Carlton House, rides the other Coolmore colt Astrology.  His sire, Galileo, gave us the aforementioned Frankel, his full brother Noble Mission and last year's Derby runner-up Treasure Beach.  Moore is leading the way in the Top Flat Jockey 2012 market and will enjoy the added freedom running in Camelot's shadow.


That Noble Mission was beaten at Newmarket by Thought Worthy gives hope that with Buick's bad experience round this track last year (when he finished 8th with Masked Marvel) and his additional years earning his living in the saddle over Joseph O'Brien, he might be able to follow up his 2011 classic win with victory here.   I should declare an interest - I have backed Buick for top jock 2012 and highlighted Thought Worthy as one to look out for in a previous post: http://palphabet.blogspot.co.uk/2012/05/part-2-memories-of-national-hunt-2011.html


Bonfire, I hear, is somewhat of a nutter.  You'd imagine his twitter account to resemble the hilarious musings of @weirdhorse but connections have been playing it down, and Andrew Balding's Dante Stakes hero has already put the O'Briens firmly in their place once this season, when Ernest Hemmingway, also of Galileo, was 14 lengths back in last place at York.  The last time I was told to be wary of a headcase horse was when Sanctuaire was partnered by Daryl Jacob in Ruby Walsh's absence at Sandown Park.  Many said that DJ would not be able to handle the horse's temperament.  He cruised to a massive 17-length win over Grade 1 winner Somersby. Main Sequence made the front page of the Racing Post last week when connections bullishly staked their claim for the Derby after success in the Lingfield all-weather trial over the same 1m 4f trip from Shantaram, and another contender on Saturday, Cavaleiro, who was clearly beaten by 6 lengths and remains a 66-1 shot.  Cavaleiro is partnered at Epsom by red-hot Hayley Turner, fresh from receiving her Glamour Magazine Sportswoman of the Year gong this week.  Who can argue with that?!


Mickdaam, who has been relatively heavily raced and has formlines over another of Andrew Baldings, Minimise Risk (having won by just over a length on May 10 at Chester) completes the single-figure line-up with Rugged Cross, who finished third, but only a short distance behind Thought Worthy and Noble Mission over 1m 2f at Newmarket.

Rumours of Frankie Dettori's retirement from the sport were quickly quashed on Twitter yesterday but nevertheless, his absence will be felt this weekend, as some fresher faces grimace in an attempt to take this highly coveted crown. 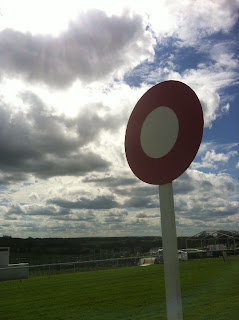 
A cursory mention - it is the rider's considerable experience (J Murtagh) and gut feeling that leads me to fancy Vow (1pt) in tomorrow's Oaks. 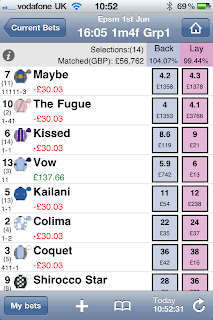