Last weekend’s stag-do involved a 6am flight to Tenerife, and then three monster nights out following the same pattern of: gentle trot at Oasis Bar to “Call me Al”, stepping up to a gallop at Joyce’s Bar with “Strings of Life” and finishing at a canter on stage at Linneker’s with the occasional veering off the beaten track to Voodoo Gentleman’s Club. 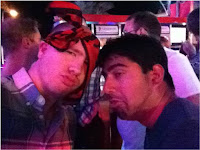 The afternoons were spent (when not evacuating one’s organs) munching Tabasco-topped toasties and supping San Migs in Leonardo’s Bar, watching the FA Cup Final or the 2,000 Guineas, gambling easily and steadily via the pub’s first-class free WiFi facilities.  Opposing AP O’Brien’s winning horse, Camelot, on the Saturday was a mistake.  Not opposing fairer-sex stable companion Maybe on the Sunday, another mistake.  Stag parties are expensive enough without doing your brains on iBetMate, but it certainly beats sitting under that roasting ball of plasma around which the Earth inexorably orbits.  Brains Done 1-0 Skin Cancer.


At the risk of being somewhat out of date, I’ll quickly round up my memories for the 2011-12 National Hunt season, so we can put that to bed and focus on the summer: 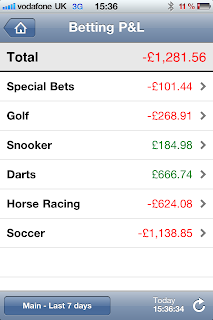 After the jubilant scenes on Boxing Day with Kauto, and even with Adrian Lewis defying wasps, wafts and Wade at Alexandra Palace, 2012 hadn’t started well.  Despite some successes, I was spreading myself thin and showing no signs of focus. 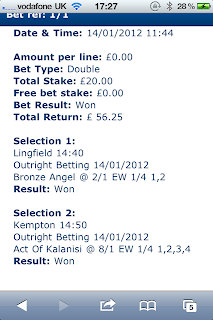 Had a bit of luck with one of my At The Races “Tracker” horses Bronze Angel, partnered on the all-weather a few times over the winter by the gorgeous Hayley Turner, as I stuck him in an each-way £20 quick-fire double with Dr Richard Newland’s jumper Act of Kalanisi. 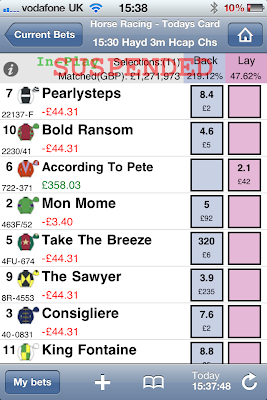 The Victor Chandler chase saw Henrietta Knight’s Somersby break his Grade One duck at Ascot while I sided with Nicholls grey Al Ferof, who finished in third place with Finian’s Rainbow nestled in between.  Elsewhere that day at Haydock a fillip came in the shape of a horse who would end the season as an Aintree fatality, the likeable According to Pete.


It was difficult to stay fully focused during this month of distraction: Valentine’s Day, a trip to Dublin for an engagement party, the postponement of Newbury’s newly named Denman chase to a Friday where I had to work in Glasgow meant the build up to Cheltenham was somewhat punctuated by dissatisfaction.   Whilst in Dublin, I was buoyed again by the way in which racing, and gambling thereon seems a more acceptable line of conversation than it does back here in the UK.  I also got a tinge of excitement as Chance du Roy went close at Ascot, heading the pack 4 out before falling away on soft ground.  Setting off for the 3m challenge at 16-1, some compensation was found as my stake lay was snapped up by greedy backers before CdR made a mistake 2 from home. 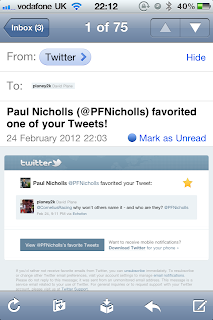 Brief interruptions of joy came in the shape of Oh Crick’s win at Chepstow, Portrait King’s win at Newcastle and Tom Segal picking Medermit for the Ryanair after I had already placed a bet on the same selection, thus beating the inevitable price-crash.
Paul Nicholls inexplicably “favouriting” one of my less interesting tweets, despite ignoring all previous attempts to catch his web-roaming eye also lifted the spirits.


Cheltenham’s ‘Black Wednesday’, where my tip of the festival, Soll, fell over and I lost nearly a grand overall, was a real low.  Big Buck’s provided a stratospheric high, and the Gold Cup was particularly special for many obvious reasons that I have already documented elsewhere on the blog.  Sprinter Sacre’s performance was breathtaking and Hunt Ball etched himself further into the hearts of horse racing fans, defying top weight against a field of 20 when winning the 2m 4f Novices’ Handicap Chase.


At the track on the Friday, after receiving a tip for the JCB Triumph Hurdle, I stuck ½ a point e/w on Countrywide Flame at 45-1 on Betfair.   With figures of 113123 going into the race, John Quinn’s consistent competitor beat my antepost fancies Grumeti and Dodging Bullets and returned me to [near] financial parity for the festival.
The week after the festivities was emotionally cloudy and difficult to accept until Chance du Roy triumphed at 9/2 in a 2m 4f handicap chase at a good-to-soft Haydock Park on the 21st.
A fantastic rollercoaster of a month! 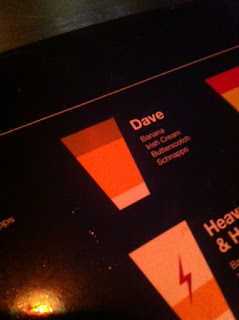 At the Aintree meeting, Grumeti got his own back on Countrywide Flame, I got my own back after ignoring decent prices about Simonsig and Sprinter Sacre for Cheltenham by pairing them up in a winning odds-on double, and Liverpool got its own back on my liver, by poisoning me with horrid shots bearing my name. 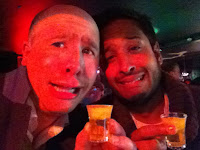 
Mates of mine whose love for the sport was initiated by spending formative years watching the National with their parents were suddenly questioning whether or not they would, or could ever watch the race again.  Some pundits, with far more experience than I, argued that people should just accept it.  Paul Nicholls snapped during an interview that people needed to “grow up”.  More considered devotees of the turf suggested further changes were required but yet many were not able to put their finger on exactly what amendments are appropriate.  Watch this space.

Finishing the season on a dreary day at Sandown Park gave some of the great horses of the year a chance to be paraded in front of the crowds, who treated the rain with the contempt it deserved.  Somehow, however, I managed to miss it!


I did enjoy one my favourite jockeys, Brendan Powell, earning a place on board Act of Kalanisi.   Read more about the lad here: http://www.bbc.co.uk/sport/0/horse-racing/16396736


With Ruby Walsh in Ireland for the delayed Punchestown showpiece, Grand National winning jockey Daryl Jacob was put atop Sanctuaire and many were worried that this nutty horse would be too much for Nicholls’ second-string jockey to handle.  Dazza promptly blew away the field in the 2m chase, including that group one winner mentioned above, Somersby.  Sanctuaire can be backed at 14.5 on Betfair for the 2013 Champion Chase if you reckon he can outclass Sprinter Sacre.


Particular pleasure was also derived at Sandown from Joseph O’Brien’s unorthodox and savvy ride of Imperial Monarch as the jumps gave way to the flat, although I had sided with unfancied Thought Worthy for this four-horse race.  Trained by John Gosden and ridden by the jockey I’ve backed for the Flat Championship this summer, William Buick, I’ll keep an eye out for Thought Worthy this season. 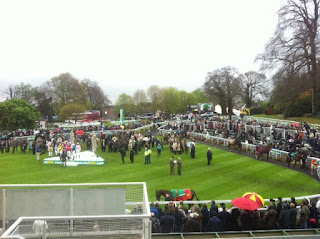 
Horse – Chance du Roy – picked because I liked the name, stuck with because I enjoyed the returns.


Track – Newbury – fell in love with racing here and my 30th birthday sojourn was splendid.