As the 2011-12 National Hunt season had the curtain brought down through sheets of rain at Sandown Park on Saturday, the damp weather did not dampen my spirits.  The heavy ground was not reflected in my anything-but-heavy heart and the grey clouds could not displace the sunshine glow in my soul.  For, dear reader, I have memories of the 2011-12 jumps season that will live on for a few furlongs yet and whilst some occasions have caused me to mourn, shed a tear or descend into borderline depression, there aren’t many things I would have changed.  So, without getting too bogged down in detail, and really only focusing on moments that I personally had the opportunity to enjoy, let us (well, me) reminisce...


A year had passed since I went from being a casual observer of horse racing to an aspiring writer, broadcaster and semi-pro punter on the sport.  Having really only hooked on it watching Denman carrying top weight at Newbury in the 2010 Hennessy Gold Cup, I was busy organising my 30th birthday party for the same meeting in 2011.
The flat season came to a joyous end at Ascot’s Champions’ Day (http://palphabet.blogspot.co.uk/2011/10/from-newmarket-nightmare-to-freaky.html), which provided an almighty emotional and financial fillip following a dreadful day’s betting at Newmarket a week earlier, where we celebrated my grandmother’s entry into the octogenarian club: http://palphabet.blogspot.co.uk/2011/10/enjoyment-is-eternal.html


The traditional curtain raiser is the Cheltenham Open meeting in November, but in October Albertas Run gave AP McCoy and Jonjo O’Neill a win in the Ascot Old Roan Chase.  These two racing legends would sadly end the season in the headlines for more sombre reasons.


Pricewise (back when he was tipping winners) tipped up Weird Al in Wetherby’s Charlie Hall chase and I was on at a decent price – that night led myself and a few Palphabet pals to a West Bromwich Albion pub in Hackney, where the night descended into intoxicated chaos!  It was also that night that I started hearing positive whispers about a horse from the Mullins yard named Soll.


I love this photograph from October, and have a mind to enter it into the IJF’s photo competition for their 2013 calendar http://www.injuredjockeys.co.uk/ 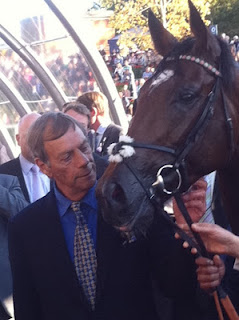 
The aforementioned 30th birthday trip to Newbury was quality.  Big Buck’s duly returned at about 1-5 (I had a £5er on him for a laugh), Rock on Ruby landed the shorter-distance hurdle race, and Caruthers brought an air of significance to the sponsor’s Gold Cup.  But for me, backing the Philip Hobbs trained Chance du Roy at 10-1 and subsequently adding him to my ATR Tracker list gave me most pleasure on the day.  Chance du delivered profit on a couple of other occasions as the season rumbled along, posting impressive figures of 125412 from Newbury to Aintree’s Topham Chase.


On the same day, up in Newcastle’s Fighting Fifth hurdle, laying Binocular proved the right decision.  Screaming “screw you Binocular!” at the TV screens from the Newbury bar was a less-measured judgement as Jason Maguire powered Overturn home. 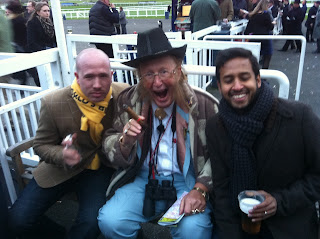 The week before this, at Haydock, I had backed Kauto Star at 7-1 to win the Betfair Chase – the three cheers for Kauto, Ruby’s beaming smile and the sight of Paul Nicholls blanking Nicky Henderson in glorious Channel 4 HD gave a real thrill, and a premonition towards what just might be on Boxing Day at Kempton Park.


The Becher chase was hosed up by Alan King’s West End Rocker and I immediately backed him antepost for the Grand National, thinking the trial alone was evidence of his undoubted supremacy over the formidable Aintree fences.  Hmmm.  It also kick-started my penchant for "Wayne-King" -   http://palphabet.blogspot.co.uk/2012/02/wayne-king-is-good-for-you.html
Sportingbet’s generous offer for the Tingle Creek Chase at Sandown refunded punters’ money if Sizing Europe proved victorious.  Henry de Bromhead’s 2010 Arkle and 2011 Champion Chase winner did the business, and my stake of £50 on Wishfull Thinking was immediately reinvested on Kauto Star to regain the Christmas crown: an unimaginable fifth King George VI Chase at 4-1 before the race, with a 6pt top-up at 11/4 on the day. 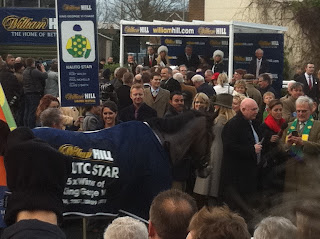 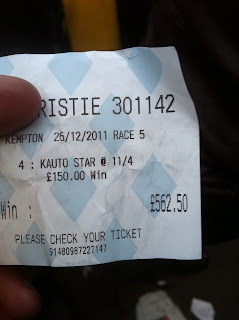 Denman retired, I appeared on 5Live – Kauto bounced back and paid for the yuletide season, sending shivers down spines & leaving very few dry eyes in the packed tattersall stands.

January - April will be posted next week (as I'm off on a stag-do tomorrow!).. along with my 10 to Follow for the flat season... which includes my 2000 Guineas tip of Born to Sea and an antepost stab from last year, Trumpet Major, on whom I have had speculative stakes at an average of 55.5 on Betfair for Saturday's first Classic of 2012... 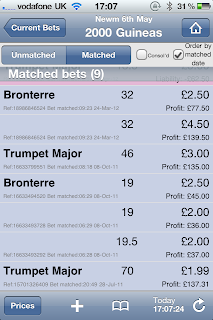