The dust has settled, the souvenir festival magazines have been published, the BBC has lost the rights to cover major horse races, and the time is right to have a glance through the legs of the fading hangover horse, as last week is pulled up to a spontaneous and heart-felt round of applause.


Having laid Long Run and followed Tom Segal in on Synchronised, I was never overly concerned about the winner of the Gold Cup on Friday as I had pretty much all eventualities covered (the fact that Nicky Henderson’s stable boy didn’t add the favourite in the 3.20 to his acca spoke volumes and I was happy to oppose The Dentist’s horse at 2-1).  I just wanted Kauto Star to come back unscathed.

Yes, having placed a 4pt wager at around 6-1, I would have preferred him to have gone all the way and cross the post ahead of his rivals, but the second it was realised that he was being led away from the track there was a wave of distinct emotion.  First, momentary deflation could be felt amongst the throngs of onlookers packed inside the enclosures.  This gave way to a palpable sense of relief (accompanied by the impromptu clapping) before finally, I think I felt a twinge of pride.  Proud to have been present to see him bowed out by the horseman who knows him best.


Ruby Walsh demonstrated in two very different rides this week why he is such a lauded jockey – on Big Buck’s, who seemed to be cajoling his rider: “go on Rubes.. prove to me that you really want to win this fourth World Hurdle” – and then on Kauto: “come on Rubes.. I’m not right here fella.. let me bow out with dignity.”


The fact that AP McCoy went on to give Synchronised such a gritty, determined, talented and vein-bulging push to beat The Giant Bolster and Long Run up the hill, felt to me like a fitting tribute to Kauto and to Ruby.  Festival Gods seemed to be saying "If the people’s horse isn’t able to finish the race, let’s give the people another white-faced horse to love."
Synchronised ain’t as pretty as Kauto, and AP’s ride was a real street brawl to watch, but it showed heart, and too many heads had backed Long Run for my liking.  Emotion and devotion won the Gold Cup on Friday in many ways.
Here’s how I finished the week from a gambling point of view. Relatively satisfied with the final figures, particularly after the run of losing bets on what I’m now dubbing “Black Wednesday,” there are a few lessons that have been learnt and some “what-ifs” to consider. Overall, though, I went with my gut, and loved every minute of it. 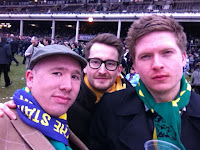 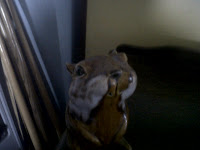 As the festival draws to a close, the Palphabet gang contemplate what to do next. Synchronised seems smug at the enormity of his day's work, and back at the guest house, a little kratooie seems sad to have missed ﻿﻿﻿﻿out on proceedings. 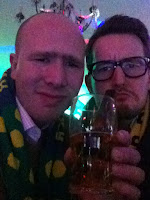 Jaegerbombs are ordered and consumed at the Racing Post party (sadly I couldn't find any of their journos to harrass, so pestered Mark Langdon on Twitter instead) and in the morning the tweed is packed away until next time.﻿﻿﻿﻿﻿﻿
Posted by David Plane at 20:30