In Amongst the Action


Apologies in advance for the permeating hangover dribbling out of my supine position in a Cheltenham guest house.  I say guest house, I’m basically staying in someone’s family home, in their attic spare room.  But it’s fine – the family who inhabit this fine tenement, nestled just 15 minutes from Cheltenham’s bustling Montpellier district, are warm and welcoming, reflecting the overall vibe of festival week.


Last night the only downside of an otherwise pleasant evening was the disappointing service in Indian Voojan.  The food was decent but after a memorable meal last year, they certainly let themselves down this time.  Aside from that, the afternoon spent watching races in the familiar surroundings of a pub, with free WiFi allowing online gambling transactions to flow swiftly and without complication, made me realise that time has flown by so quickly since last Cheltenham Festival Thursday (when I was doing much the same as I’ve just described). 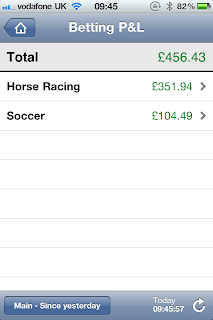 P&L was healthily restored by Big Buck’s triumphant defence of his World Hurdle crown.  As if it needed confirmation, he really is an all-time legend of staying hudlers and I just love his lazy attitude to a race – Ruby really had to work hard to get him over the line, but only because Buck’s wanted him to.  Watching the re-run of the exciting contest in a pub later was just as thrilling, and was punctuated with the audio backdrop of the Kaiser Chief’s “Ruby Ruby Ruby Ruby – ahhhhhahhhahahhhh” and the Stones’ “Ruby Tuesday”.  It was Thursday, but fine.


Today I cannot describe how special it will be to see Kauto Star win back the Gold Cup title for a second time.  Surely it will guarantee his status as the greatest race horse of all time.  I’m on antepost at prices ranging from 4-1 to 11-1 (during “the scare”) and will top up at the track.  Burton Port is my alternative selection at 7-1 e/w.


Our hosts are making breakfast for us now so I have no time to go into great detail about the rest of my Friday bets.  In short they are:


Anyone know any other good curry houses in Cheltenham?
Posted by David Plane at 10:22