Noel Gallagher understands my predicament.  He is the britpop embodiment of the Palphabet Blog. 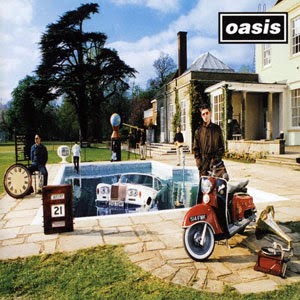 After the critical acclaim of Definitely Maybe, the stadium tours that followed (What's the Story) Morning Glory?; the worldwide success, the adulation; the vast wads of cash and pyramid piles of pills, powder and pints.  After all of that stuff, the diminutive Mancunian musician sat down and self-indulgently penned the bragging, bloated Be Here Now.

Noel stood, perhaps on the shoulder of giants, certainly on the precipice of artistic immortality on the day that album was released and faced, in my mind, a very similar challenge to the one I face today.  You see, in many (well, some) ways (kind of), BHN was the music industry's equivalent of the 2014 Supreme Novices' Hurdle, the traditional curtain-raiser to the Cheltenham Festival of National Hunt Horse Racing.

Bear with me, and behold these blog entries, posted on this very forum on the eve of the festival over the past two years.  Firstly, Cinders & Ashes - the very by-product of Cigarettes and Alcohol - a red-hot 10/1 belter, which kicked off proceedings 24 months ago, and whose embers still burn bright in my festival memory banks.   Then the follow up in 2013: a perfect collaboration of Mullins's training brilliance, Walsh's riding magnificence and Rich Ricci's equine-ownership arrogance: Champagne "Supernova" Fever:  a 6/1 conqueror of Cleeve Hill in consecutive annual contests, who this year attempts his own "difficult third album".

The anticipation of the year's first festival selection is almost too much for me!   I desperately desire to deliver a Knebworth House recital  but realise such levels of performance are unsustainable without sufficient research and rehearsal.  Couple this self-imposed pressure with the distraction of having started a business in the past few months, and I feel like I'm heading off to do battle with the bookies at Cheltenham this week with as much preparation time as is normally afforded a microwave telly-dinner.  D'You Know What I Mean? 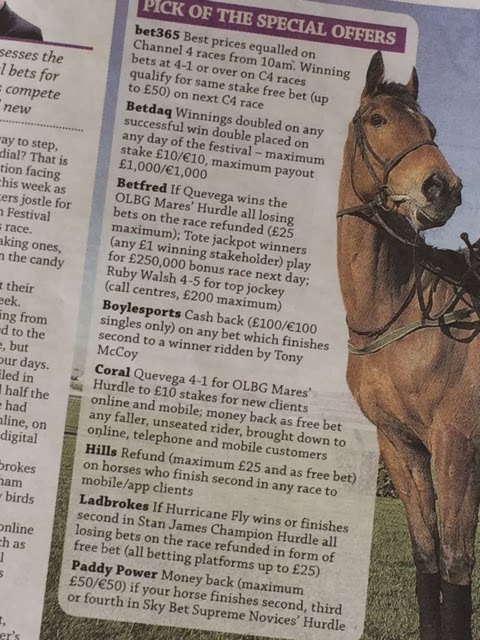 Maybe I should just Roll With It.  Despite not feeling as organised as I would like to be on this, the Christmas Eve of equestrian entertainment, I still feel the ever-enterprising bookies are charitably offering such generous gambling gifts that it would be wrong of me to bemoan the rock-god situation in which I seem to find myself.  So here's the track listing for day one of this year's festival season and a summary of the best deals available online and with your high street turf accountant:

The Liquidator - 22/1 with Paddy Power offering money back if your horse finishes 2nd, 3rd or 4th.  Vaniteux, thought by most to be Nicky Henderson's support act in this race before Barry Geraghty took the ride, is the 12/1 alternative selection to take on the much fancied duo of Irving and Vautour, who deservedly vie for favouritism at the head of the market.  I just think The Liquidator's experience around this track, accepting his disappointing run at Kempton last time out, warrants a much skinnier price than the one on offer here.

David Pipe, fresh off the back of Imperial Cup victory at Sandown on Saturday can be backed as top Cheltenham trainer at 33/1 generally, 50/1 with 888.com, and with Kings Palace, Red Sherlock, Dynaste etc, surely stands as good a chance as any of the other British contenders.  Yet his price is significantly juicier than his compatriots. Usually regarded as being strong in handicaps, here's a clip taken from his website, in which he addresses the chances of his novice hurdlers, including my selection and former Cheltenham course winner, The Liquidator: http://vimeo.com/88241732.

And although we have come to expect Pipe-trained greys to come up short in recent years, Tom Scudamore rates Dynaste's chance as his best ride of the week, and obviously plans to make up for last year's runner-up spot and 2012's Grands Crus disappointment later on in the week: 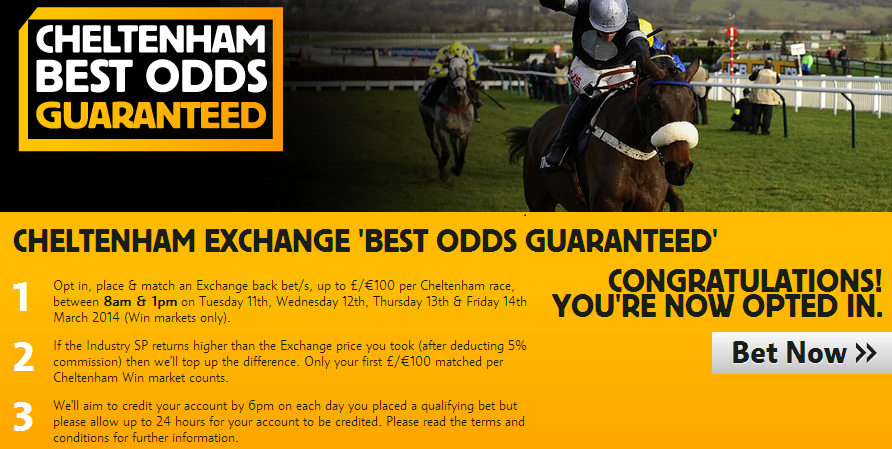 Rock on Ruby & Trifolium - available at 5/1 and 9/2 respectively - will check the Betfair exchange in the morning as they are offering Best Odds Guaranteed every day in the build-up to The Roar.  Much as I think the aforementioned Walsh/Mullins/Ricci combination is one to get even the most cool racing customer feverish under the white collar, I'm not confident enough in Champagne's ability to pop over every fence with the required fluency in what will be a pacy affair.  Noel Fehily is certain to have a good week, and he can get off the mark here on board Rock on Ruby, who is a consistent if unfashionable performer on this, the biggest of stages.  Trifolium is Tom Segal's antepost pick and is also partnered by a Palphabet favourite jockey in BJ Cooper, who should make the most of his steed's excellent jumping ability.

I like three here! Course, distance and 2012 race winner Alfie Sherrin has the strongest chance, and I fancy AP to do what he does best in handicap fields like this, particularly since he has clearly opted for this 10 stone 9er's chance over top weight Cantlow, on whom I saw him win back at Newbury in November at 6/1. The Package for Pipe and Scu as mentioned above at a big price after a lengthy lay-off, and a small stake on Time for Rupert.

Ladbrokes and William Hill are clearly having a little side bet of their own this week: who can disrespect Hurricane Fly the most?  Hills go 6/1 tomorrow morning from 10am, offering 10,000 punters the chance to have £10 at a stand out price.  Lads, meanwhile, have been marketing their "money back if Fly finishes 1st or 2nd" for weeks now.  I have backed Hurricane Fly, who I think is as strong as ever, with a strong stake, and also had a bit of Melodic Rendezvous at 25/1 with Magic Sign, fully expecting to be able to claim against their insurance policy if, as I expect, Hurricane Fly finishes in the top two.  Young, strong contenders Jezki, The New One and Our Conor make this one of the races of the week, with seven-year-old and multiple grade-one winner My Tent or Yours extremely well fancied if he can put it all together and make it up the hill.  A mouth watering renewal, but expect Ruby to be holding up three victorious fingers as he passes the lolly pop ahead of his rivals yet again.

Need I say more?  4/1 for new Coral customers is available, but even the 1.9 on Betfair appeals for a horse who has made this race her own over the past five seasons.  Betfred's offer of money back when Quevega wins is effectively a free bet, so why not have it on Cockney Sparrow at 8s or Highland Retreat at 14?

Shutthefrontdoor with his experience and Nina Carberry with hers, well worth the short price.  I like Herdsman too, trained by Grand National winning boss Sue Smith and fancied by the RP's northern tipster, Colin Russell.

It's that tricky third album again! Haunting me all the way to the end of the card.  With Palphabet wins for Rajdhani Express last year, and top weight Hunt Ball in 2012, I need to avoid a Be Here Now at the close of play as well as at the start of the day!  Pricewise has tipped two at double figures (Art of Logistics and Festive Affair), and whilst I will be backing both of those at 8.30 in the morning, I am plumping for Gardefort at 50/1 for Venetia Williams and Aidan Coleman, and Baby Mix, who is partnered by former Irish Champ Davy Russell.

For what it's worth, by the way, I think Be Here Now is pretty good! Stand by Me remains one of my favourite Oasis songs, and at the end of the day, it's more important to have faith in your own convictions than to worry what the critics might say!  Best of luck for the week ahead .. If you've got this far, I'm sure you're as Mad Ferret as I am!