Class is Permanent, but Form can bring home the Fillips


For the past couple of weeks, I've had the honour of writing a review blog for the website of quality magazine Golf Monthly.  This piece appears on there via this link, and my first two blogs can be found here and here...


The old sporting adage often tells us thus: “form is temporary, class is permanent”.  You only have to look at events at the Crucible Theatre these past couple of weeks to know that is a fair assessment of the powers truly classy individuals hold over their rivals in the quest for silverware and cash in their particular field.
The nearest Ronnie O’Sullivan has come to pink balls in the last twelve months has been whilst working on a pig farm, and yet he rocks up in the biggest snooker tournament on earth and makes porkmeat of opposition who, in their own right, are amongst the pantheon of potting, the best on the baize.


In golf betting, FiTCiP, if you’ll permit me the acronymisation, is regularly borne out too, with the victory of a huge outsider like Derek “who?!” Ernst at Quail Hollow this weekend extremely unlikely to be repeated when the runners and riders line up at TPC Sawgrass for the Players Championship on Thursday.   Ernst was available at around 300/1 with the bookies pre-event and was rated an eye-watering 999/1 shot by the layers on the Betfair exchange, according to this excellent debrief of last week’s action from Steve Rawlings.   Putting it another way (and that’s putting, not PUTTing): the percentage chance Derek Ernst had of winning the Wells Fargo Championship was somewhere between 0.33 and 0.10 percent.  Needless to say he wasn’t in my portfolio:

Many think, quite rightly, that golf is a difficult sport to predict, and therefore to make money betting on, but the other two tournaments last weekend (in China and Indonesia) provided big glimmers of hope, and lead me to question the very fabric of the FiTCiP concept.  Obviously class is permanent, and it’s no surprise that golf has been dominated in various modern eras by class: Nicklaus, Palmer, Player, Watson, Woods, to name a few.
But let’s not be so harsh on Father Form here.  Look at those names closely and form, specifically course/region form, is perhaps more ubiquitous than the Class Camp would have us believe.  Jack Nicklaus dominated at Augusta (six Masters titles); Watson prevailed on UK soil at the Open (five Claret Jugs); Woods appears four times in the top five of this list of golfers who “own” certain PGA Tour Events – nobody else has won more than one event as many times as Tiger (bagged six tour titles more than five times each; 15 titles in his native state of Florida).
Aussie Greg Rumford took the Volvo China Open, making him a back-to-back winner on far east tracks having won the Ballatine’s in South Korea the week before.   Meanwhile Victor Dubuisson, top-10 in India’s Avantha Masters, top-five in Malaysia and identified in BetSWOT’s excellent China Open analysis went one better than last year’s fourth-place finish at Binhai Lake Golf Club, finishing third with two bogey-free closing rounds and returned some top 10 money. 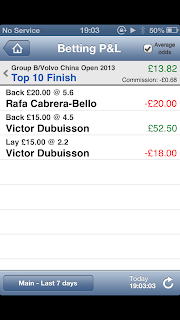 The Racing Post’s golf betting oracle, Steve Palmer, called Bernd Wiesberger, who I backed with £50 e/w at 10/1 “the bet of the week”.  Bernd bullied the field at the 2012 Ballantine’s, winning by five strokes, and took the Indonesian Masters in a Royale Jakarta Golf Club playoff against Ernie Els to gain his second Asian title.

Form may be temporary, but therefore it can be preciously profitable.  Consider that this weekend at Sawgrass, a ball-strikers’ paradise where past winners have built up considerable course knowledge before capturing the unofficial fifth major.  GM's Fergus Bisset highlighted as much in last year’s preview.  I like the look of Masters Champ Adam Scott at 18/1 with Paddy Power paying 6 places e/w (Stan James 16/1, 7 places e/w).  Anyone who can stand on the 17th tee, looking across at ET's head, and keep his head having been there before, needs to be respected and could well bring back the booty.
***﻿
Since I started shopping around a bit more for the best prices, which aren't always  found on the Betfair exchange, my Palphabet portfolios have become so varied I've felt the need to keep notes on my iPhone.  I've mentioned before that using http://www.oddschecker.com is vital to building a balanced book for the weekend's betting enjoyment, and with the bookmakers all competing for your custom, there are some tempting offers out there that have to be considered.  This week, however, all of my wagers have been placed on the exchange, with the exception of the Adam Scott bet.  What you lose on the outright part of the stake (Betfair layers have him at 21/1 compared to Power's 18/1) you make back on the fact they're giving you an extra place at a quarter the odds, i.e. 9/2... the same price you can get on Betfair for a top 5 finish. 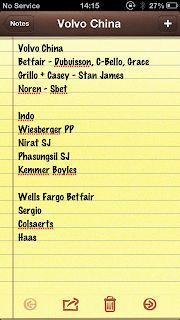 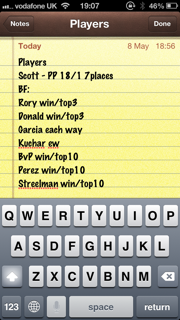