It is not often a choice I find myself mentally wrestling with, but today the turmoil inside my cranium is clouding everything else around me: guys or girls?  If it's a straight-up brawl between two adults, I would normally say the guy would win, although I hasten to add I do not in any way condone this kind of violence.  If it was a case of me being presented with one of each for an hour of rolly-polly in the bedroom, I would side with the fairer sex - a girl - although again, if you prefer guys, that's absolutely fine.  Today, over three miles in the Ladbroke's World Hurdle, though, I'm being forced to choose between Solwhit and Quevega, and I just don't think I know what to do.

Solwhit has eight grade 1 victories to his name and is relishing the longer distance races, having been upped in trip from around the 2m4f mark to 3m at the Cheltenham festival.  Three weeks after festival success in the west country, he went on to claim another festival title, this time at Aintree.  And as Sprinter Sacre demonstrated almost flawlessly on Tuesday, it is not impossible to go over to Punchestown and achieve a hat-trick of national hunt festival titles in exactly six weeks.  Not impossible, but surely improbable for Solwhit when you consider the counter argument.

Quevega has won this race at each of the past three renewals.   She has an outstandingly impressive five Cheltenham Mares' Hurdles under her belt.  And that belt can be tightened ever so slightly more than Solwhit's today as she will carrying a not inconsiderable amount less around her midrift than the rest of the field, receiving as she does an allowance of 7lbs on account of her being a "she".   She is also slightly bigger in the outright market - currently 3.0 on Betfair compared to Solwhit's 2.46.

On top of that, there is Holywell to consider amongst the challengers, himself a festival winner and a very game looking runner-up to Solwhit at Aintree earlier this month.  Reve de Sivola has been tipped by Paul Kealy in the Racing Post on account of the conditions at Punchestown, as has Zaidpour (by Longshot Ed Quigly).  In a race paying only two places each-way, though, the exacta looks the bet to me.  But which way round?  I'm going to go heart over head and say Quevega from Solwhit.  The price in the outright market appeals more too.  If only Big Buck's was over there... this puzzle would be a hell of a lot easier to piece together! 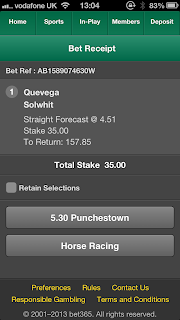 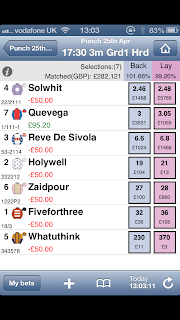 On top of this Grade 1 today is the 6.40 Ryanair Novice Chase and I was delighted to see Tom Segal (after his success at Epsom yesterday with Area Fifty One) pick out Alderwood, who had earlier appeared in my Inbox courtesy of the At The Races "Tracker" service.  I got the 7/1 with Coral this morning so hope he can get the better of Benefficient - ridden by the man I was waxing lyrical about just yesterday - Bryan Cooper. 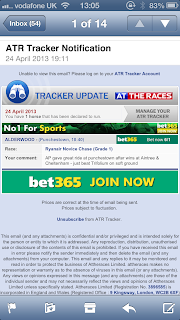 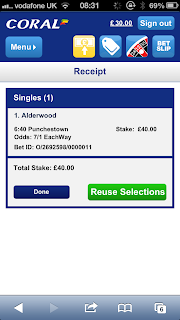 Yesterday could have been a lot better - the solitary bit of Punchestown profit on the P&L report below came from laying Ballycasey, but the subsequent lay of Sir Des Champs was extremely misjudged.  The multiple returned a reasonable amount back, with Kie winning at Perth, Gassin Golf narrowly missing out at Punchestown and First Lieutenant making the places in the Gold Cup, so I was reasonably satisfied with the consolation that the payout could have been much bigger with a spot more luck.  I'll keep sniffing them out and hopefully one of them will come in soon... but until then, I'll just rely on Tom Segal to save my bacon with big priced winners on the flat like Area Fifty One.  Out of this world stuff, Tom - our very own punting X-File. 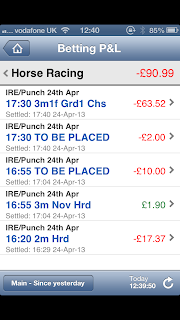 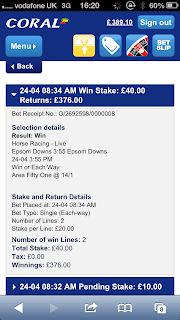 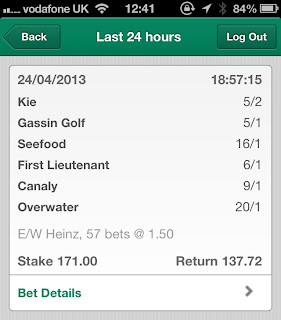