All-Time Monster Chaser - the Star may never be Kaut

The Festive Season & a Retrospective Glance at 2011

Did any of you heed my Boxing Day treble?

"Why not back the following in a triple.. all PF Nicholls runners at Kempton on Boxing Day:

Hope not - as it would not have paid out - but it was mightily close on a Boxing Day that will long live in the memory for reasons other than bubble & squeak and turkey sandwiches.

The three Grade 1 races were all fiercely contested, treating the packed galleries to spine-tingling finishes in the very short run-in to home after the last flight.

Grands Crus rewarded those of us who have stuck with him this season (http://palphabet.blogspot.com/2011/11/crus-ing-into-jump-season.html), showing that the step up from Novice Hurdling to Novice Chasing is not asking too much of this powerful grey, who jumped gracefully under Tom Scu and held off Silviniaco Conti.  I backed the 1-2 in this race with a toteexacta and a reverse at the track, and also had profitable returns using the same tactic in the Christmas Hurdle. 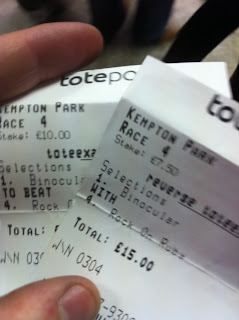 AP gave Binocular a vintage ride, switching from out wide of Rock on Ruby and Overturn, who looked strong three from home, and turned the former Champion Hurdler towards the rail, where he just had enough to beat Ruby Walsh on a mount bearing his name, but not named after him.  “Ruby” actually refers to a Ladies’ Shop in Sherbourne:  http://www.dailymail.co.uk/sport/racing/article-1343274/Captains-log-Emerging-star-Rock-On-Rubys-Newbury-success-music-Festival-Goers-ears.html

The highlight of the day (and arguably, year) was obviously seeing Kauto Star regain his King George title.  Column inches in national newspapers and racing press alike have done more justice to l ‘Extraterrestrial than I could here, so I’ll just post a few pictures and direct you to this tweet of mine (right).  It shows Kauto leaping eight from home like a gazelle on springs and the collective intake of breath from the packed Kempton gallery will ring in my ears for many a year.

For readers not familiar with the greatest chaser of our generation, have a look at this excellent piece from “Honest” Frank Keogh:
http://news.bbc.co.uk/sport1/hi/other_sports/horse_racing/8425970.stm

Finally, I’m going to use this blog to summarise some personal highlights of 2011, many of which I have experienced first-hand.  They’re in no particular order, and are subject to debate, but for one reason or another they have heightened my emotions throughout this memorable year of sport, betting and betting on sport:
Frankel – The Freak was the feature on the flat in 2011 and I had increasingly large stakes and ever diminishing odds in the Guineas, the Sussex “Duel on the Downs” and on Champions’ Day at Ascot, which was one of my best days out of all time! There are loads of pics from the day here: http://palphabet.blogspot.com/2011_10_01_archive.html
Denman – we got a cat this year and named him after “The Tank”  - seeing him finishing a gallant second to Long Run in the Gold Cup was a beautiful sight.  The horse that is, not my cat.

Kauto Star – as mentioned above – what a fantastic return for this high class chaser –  he may be less of a “horse for the people” when compared to his next door neighbour, but Kauto paid for Christmas!

The Gold Cup at Cheltenham featuring the above two Ditcheat superstars was a classic, and seeing those two bomb up the home straight, albeit behind the Dentist & Long Run, left all the respective connections feeling like winners on the day.  We’ve already booked our tickets and accommodation for the 2012 festival, which is only a few months away.
Barzalona – his celebration on Pour Moi was so iconic that Ruby Walsh replicated it on board Kauto Star on Boxing Day!  I listened to this race on the wireless whilst at Lord’s watching England v Sri Lanka’s test match and it sounded like Andre Fabre’s colt was out of the picture.  He touched over 30-1 in running and came from the back to steal it, but Mickael’s arrogant fist-punch, standing up in the stirrups would’ve left most thinking he’d romped home.  He’s obviously had his fair share of photo finishes in the past.

Barcelona V Man United – Barcelona available at evens to win this contest in 90 minutes still looks like a great shout if you were on.  I enjoyed it in a Spanish bar in Shoreditch with my Barcelona shirt on – a masterclass in football, firmly putting Fergie et al in their place again.

Meeting Henry Winter & Guillem Balague at The Emirates v Barcelona – two doyens of sporting journalism took the time to pose with me – I don’t know how often they get stopped by fans of their work!
Djokovic – in 2010, I failed to lay Roger Federer as he had two match points over the Serbian in the semi-final of the US Open, and Nolé made me pay.  I lost £425.  This year, I didn’t make the same mistake, and was more able to savour a great year for the likeable powerhouse. http://www.guardian.co.uk/sport/2011/sep/11/us-open-2011-federer-djokovic

Darren Clarke – my first experience of live golf was down on the Kent coast – live links golf.  I backed Clarke on my way down from St Pancras with £100 at 4s on Betfair, and was on the 18th green as he lifted the Claret Jug.  No phones allowed on course, but I bought a lovely branded radio to listen to events unfold whilst following DC, Mickelson, Jiménez and the Yank in orange around the undulating countryside.
Ashes – this seems so long ago now but the start of the year was characterised by late nights and red eyes as Essex boy-wonder Cookie showed the Aussies how to bat.

Sachin – I honestly thought that I would see him get his 100th ton this summer, and was sure, with tickets booked for Lord’s, the Oval and Edgbaston, that I would witness it in the flesh.  He was looking in great shape in the midlands with an ominous strike rate of 66.66 before stepping on his stumps for 40.   http://www.guardian.co.uk/sport/blog/2011/aug/13/sachin-tendulkar-india-england
http://www.espncricinfo.com/england-v-india-2011/engine/match/474474.html
Orient 1-1 Sheffield United http://news.bbc.co.uk/sport1/hi/football/15319619.stm it may have just been a relatively early-in-the-season league fixture to most, but to this blogger it represented a confirmation that our poor start to the campaign was unfortunate, rather than indicative of a deep malaise.   Down to 10 men, having had left-back “Champagne” Charlie Daniels sent off by idiotic official Oliver Langford, veteran striker Kevin Lisbie snatched the draw for the Os in the 6th minute of 2nd half stoppage-time.  A pitch invasion nearly ensued; saliva was allegedly projected in the direction of the Blades’ dugout.  As savoury as one of Brisbane Road’s infamous Chicken Balti Pies, I’m not going to defend that behaviour, but I leapt out of my seat and jumped around like a maniac and gyrated in a way reminiscent of the Kassam Stadium, Oxford, May 6th 2006, when I was chased off of the pitch by a police horse.
http://www.leytonorient.com/page/MatchReport/0,,10439~57712,00.html
http://www.leytonorient.com/page/MatchReport/0,,10439~29206,00.html
Judd Trump – OK, so my punt on him to win Sports Personality of the Year was foiled by all except those nice nominators from Nuts magazine (or was it Zoo?) but I had sizeable returns from him making the final of the World Championship in 2011 and going on to claim the UK title just a few weeks ago, beating Rocket Ronnie on the way.  This playboi is one for the future, no doubt, and yes, I’m talking about SPOTY.

Phew - I have enjoyed one hell of a sporting year!  Finally, a cursory mention for a) Hamilton v Massa – I just found their episodes this year mildly amusing; and b) David Silva – for me, the 2nd best thing in the Premier League after Mario Balotelli, but certainly the best player on any pitch in England throughout 2011, apart from Paul-José M’Poku. 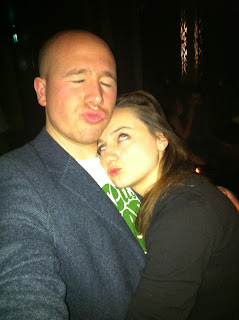