Wayne - King is good for you

Readers of my recent festival preview will have noticed that Alan King featured throughout, and I was delighted to hear Tom Segal picking out Wayne Hutchinson as one of his favourite jockeys when I finally got around to watching his Morning Line appearance on tape this fine Sunday dawn.


At Chepstow yesterday, Hutch provided King with a 5-1 winner in the shape of Oh Crick, who was sporting blinkers for the first time at a track where his trainer had drawn a blank in 45 previous attempts over the past 843 days. I didn't know all this when I placed a 1pt stake on the horse, and this was King's only runner at the Monmouthshire course yesterday, but it gives me a thrill to discover such facts in retrospect. 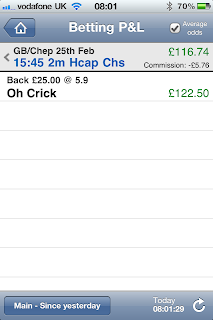 Elsewhere, Grumeti showed again that when he doesn’t end up on his nose, he wins.  With a rating of 154 and on the up, Grumeti, under Choc Thornton, went off clear favourite and duly dispatched challengers in the Grade 2 Novices’ Hurdle over 2m.  Paul Nicholls’s Dodging Bullets provided the only real opposition inside the home straight but Grumeti was cruising and proved the 1.51 Betfair SP correct.


King currently boasts a 51% RTF figure, meaning that across the past fortnight, just over half of his runners have Run to Form (within 5lb of their RP rating) and the newspaper felt fit to highlight his success in Saturday races worth £10k or more with this eye-catching headline: 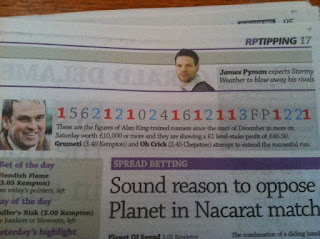 All in all, I'm delighted with my position on Medermit for the Ryanair, excited about the prospects of West End Rocker (and to a lesser extent Hold on Julio, who I have not backed ante post) and hope King, and Wayne Hutchinson's good fortune continues as the festival draws inexorably closer.
DP

Minsk Mix Up
Oh.. before I forget.. isn't this funny - Minsk has been being talked up as one to watch since switching from long, flat races to jumps, and I had a point on him for the JCB Triumph Hurdle.  Baby Mix disappointed last time out but I thought 23 looked big about the grey gelding, so I backed him ante post yesterday too.  Minsk failed to deliver at Kempton and is now double the odds I got him at, whilst Mix (one-third of a Saturday afternoon Paddy Brennan threesome) has been cut to 7-1.  The favourite is now the aforementioned Alan King trained Grumeti (6-1), who I have not had anything on!